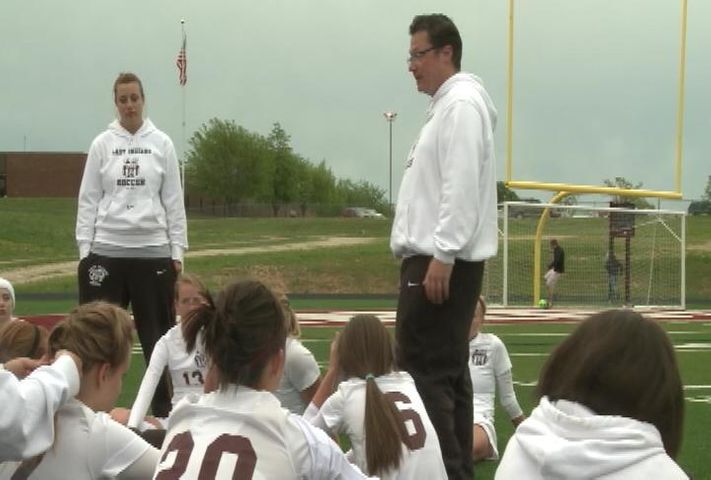 OSAGE BEACH - A year ago, the Osage High School girls soccer team was just taking its first breath of life.

Most of the girls who joined the team had never touched a soccer ball.

"I never played when I was little, like a lot of other people have," said Osage senior midfielder Samantha Ladd. Ever since we started summer stuff last year, I started playing."

Others had only played when they were little kids. So the first day of practice at the beginning of last summer was very interesting.

"I couldn't hit the ball to save my life," said senior midfielder Charli Prestien.

Everyone had to learn the basics of the game. The team watched college game tapes and learned the rules.

Coach Brandon Randall moved from north-central Illinois less than two years ago to get soccer started at Osage. Randall has played soccer for most of his life, so he was able to teach the fundamentals to the team.

"It was the perfect storm of opportunity," Randall said. "They needed a teaching position I could fill, and they needed someone to start their program for boys and girls, and I had experience starting a girls program where I was from, so it just worked out."

So far, in their first season, the team is 4-12-1, with five regular season games remaining.

But wins mean little when it's a learning experience. Randall says the team has come far since the first game of the season.

"Things we had hoped to get to in the next few years, we're doing it now, and we're getting better every time we take the field," said Randall.

For the seniors, their first season is also their last.

"It's sad, but it's a lot of fun to be a part of it," said senior striker Kimmy Brake. "I can say I was part of the first team here at Osage."

But for the freshman, sophomores, and juniors, it's only the beginning.

"I'm really excited to get to play soccer, and now that we all have a year under our belts, we'll be even better," said junior midfielder Kelsey Abbott.