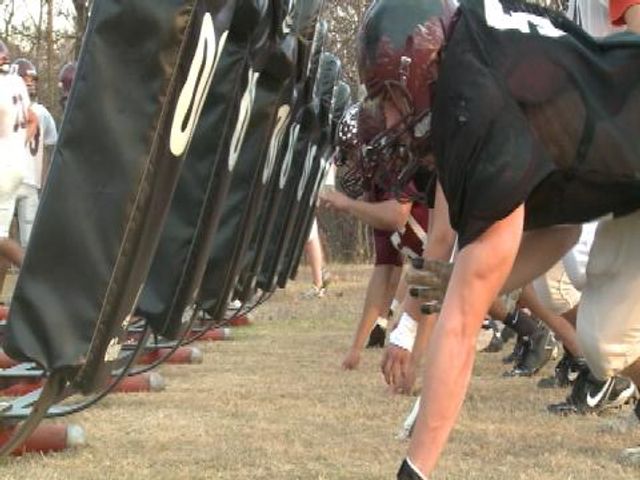 Like them, the Osage High School Indians football team has its own name for the guys battling in the trenches.

"We call ourselves 'Blackfoot,' said junior offensive lineman Donald Hudlemeyer. "We are really close and we have a good relationship up front."

The whole team recognizes the nickname, even when a play goes bad.

"If you ever hear a running back get mad or anything it's probably because they are saying, 'c'mon Blackfoot' because we missed a block or something," said senior center Carlos Molina.

Assistant coach Drew Phillips came up with the moniker to acknowledge the guys who don't get to score the touchdowns.

"I came up with it, but I had some help," said Phillips. "We wanted an identity about seven or eight years ago for our lineman on both sides of the football, and the reason for that is lineman don't get a lot of credit."

The term Blackfoot Indian describes a group of Indian tribes originally located in Alberta, Canada, and Montana. They got their name "Blackfoot" from the color of the moccasins that they wore. However, it's not their clothes, but their actions that gave this Osage offensive line its name.

"The Blackfoot tribe fought on foot. And that's what football is. Football is trench warfare."

Most of the linemen, like Carlos Molina, think it applies well to him and his teammates.

"It corresponds, and it plays a huge role with the team, and it's definitely important," said Molina. "It's definitely probably one of the most important things because we start it up. We start everything off for the running backs to go off of."

They've started it up and then some. Osage is 13-0 on the season. The team's latest show of force came last Saturday in the Class 3 state quarterfinals against North Callaway. Osage won that game 63-21.

Senior offensive lineman Shane Calk has his own take on the nickname.

"It's a huge deal," he said. "I mean, we're down there on the field working. Working our butts off, you know, trying to get stuff done. And you know, we mess around. We bond a lot."

And for Calk, to be a part of the offensive line is something special.

"It's a lot just to be part of a team, but to be a part of a specific unit within that team, it's even better," said the 6-foot-6 guard.

Phillips hopes the tradition he started continues far into the future.

Osage plays at John Burroughs in the state semifinals on Saturday at 1:30 p.m.