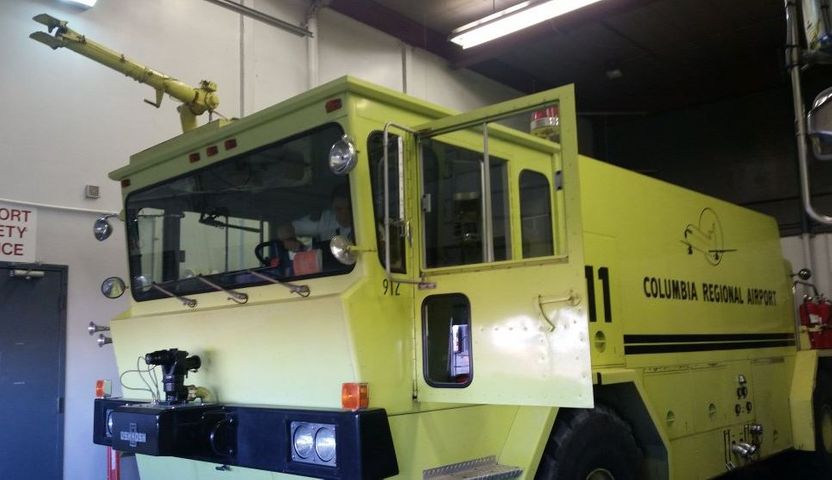 COLUMBIA - Columbia Regional Airport is asking the city for a new aircraft rescue firefighting vehicle. It would replace the 1981 Oshkosh ARFF vehicle, currently used as a back up, which does not meet Federal Aviation Administration regulations.

The pertinent provision requires an aircraft rescue vehicle to be a 4-wheeled vehicle capable of holding 1,500 gallons of water, 200 gallons of foam, and 500 pounds of dry chemicals.

"The FAA has a standard for the RF trucks to meet and the 1980 Oshkosh doesn't meet that standard, without dry chem capabilities," Airport Operations Supervisor Mike Parks said.

He said, if the Oshkosh truck were to be the only truck in service, making it the primary vehicle, the airport would have to get a supplemental vehicle from Jefferson City in order to meet FAA requirements.

"I think a 1980's technology is definitely aging and, with a truck that old, it's time to replace it," Parks said. "You need to have something that is capable of responding and have the capabilities and technology of today."

He said if the airport gets the new truck, it would retire the Oshkosh and put the current primary vehicle, a 2004 model, into reserve status.

"We have to meet a three minute response time to the mid-point of the furthest runway," Parks said. "So we have to have a truck that is capable, quick and efficient and we don't wanna have to worry about a truck being able to make that response time and meet our FAA requirement for our airport."

He said ensuring the airport has equipment that is running properly is very important for ensuring the safety of all visitors.

"I think it's important as the airport is growing that we keep up with the emergency response vehicles, capable of taking care of the larger aircrafts that serve the airport and air-carrier," Parks said.