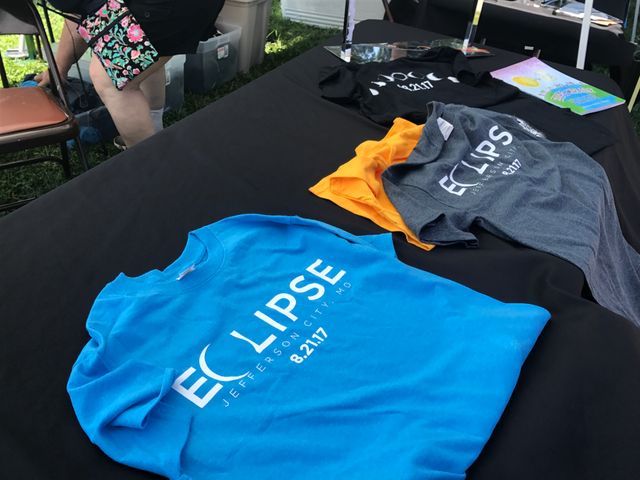 Jefferson City hosts events throughout the city to get visitors and residents ready for the historic event.

JEFFERSON CITY - The once-in-a-lifetime opportunity to see a total solar eclipse drew people to Jefferson City over the weekend from all over the United States, including visitors from Wisconsin, Texas and Oklahoma.

Quinten Rice, co-coordinator of Total Eclipse of the Park, said the group began planning for this event over a year ago.

The Kattchee family travelled from La Crosse, Wisconsin to Jefferson City for a glimpse of totality and is camping in the area for the week.

"Well I'm kind of excited but I'm kind of scared that I'll look into the sun," Gabe Kattchee said.

People of all ages watched a live band, travelled by a free trolley, watched sci-fi movies outdoors and shopped at local vendor booths at Total Eclipse of the Park, located at Riverside Park in Jefferson City. The event will continue Monday with a barbecue and a viewing area for the eclipse.

Parking for Jefferson City events may be scarce, according to Donna Deetz, owner of the Jefferson City trolley, but Deetz recommends taking the free trolley.

“The trolley’s are running a continuous shuttle service from the Capitol Building down to Riverside Park," Deetz said. "Some Jefferson City residents are charging to park in their driveways, but parking at the shuttle stops and parking garages are free Monday."

NASA will broadcast live from downtown Jefferson City between the Capitol building and the Missouri Supreme Court.

Twin sisters Sophia and Natalie Miner of mid-Missouri are celebrating more than the eclipse Monday. It is also their birthday and Sophia Miner said she is excited for "wearing the glasses and celebrating my birthday because I've waited forever to be 9."

"I think its great to see everybody so excited about some science, actually asking some deep questions and wanting to know more about what's going on with the world and our system," Fox said.