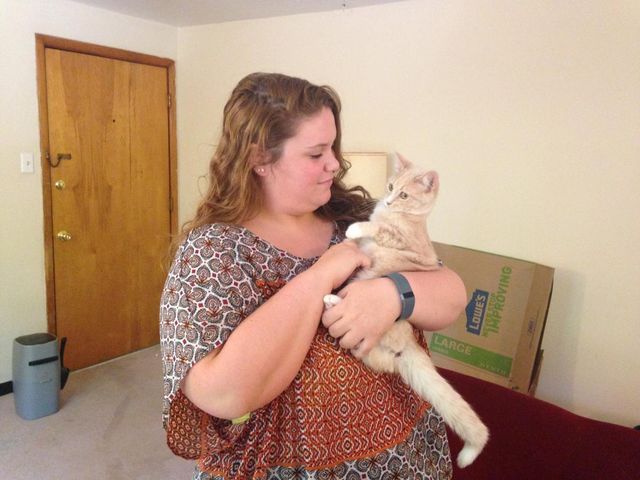 COLUMBIA - As she finished packing the last of her boxes to change apartments, Christina Rees said she relied on her emotional service cat, Cici, to keep her calm through the transition.

"She allows me to be who I am and not be afraid to have breakdowns," Rees said.

Rees got Cici in May 2014 with the intention to register her as an emotional service animal. Rees said she grew up with cats and needed a reminder of home to help with her anxiety and depression after her freshman year of college.

Rees said she spoke with her counselor who agreed to the idea of an emotional service animal.

In November 2015, Rees got a second cat, Raja, which she plans to train as a therapy cat in the future. Rees said her cats help with her anxiety and depression.

"If I'm crying, my cats wipe away my tears," Rees said. "They purr and it actually calms me down and brings my heart rate down."

As a registered emotional service animal, Cici is considered a "reasonable accommodation" under no-pet housing rules under the federal Fair Housing Act. Rees said she did not experience trouble with the landlord of her future apartment, but she had previous landlords who argued that Cici was not considered a medical need.

"To be fought on my service cat that I have rights for was insane," Rees said.

Rees says some people might not think emotional service animals are necessary because the owners might not have the kind of obvious physical needs typically served by therapy animals.

"It's really frustrating because some people abuse it," Rees said.

The registration includes identification cards, a vest and a certificate. Rees said she has seen the vests for sale online with no certification required.

The registration takes just a few steps online, and Rees said, when she offered a counselor note to the website for confirmation, the company said it was not necessary.

"It's basically a scam because there's no federal law saying that they have any protections at all," Danner said. "The point of it, I don't understand."

Danner uses her therapy dog, Chloe, in some of her sessions. She said animals can have a dramatic effect on a person's mood.

"The emotional impact of animals for specific people and specific situations can really be tremendous," Danner said.

Rees said she has benefited from Cici and will train her new cat, Raja, to be a therapy animal once she is old enough.