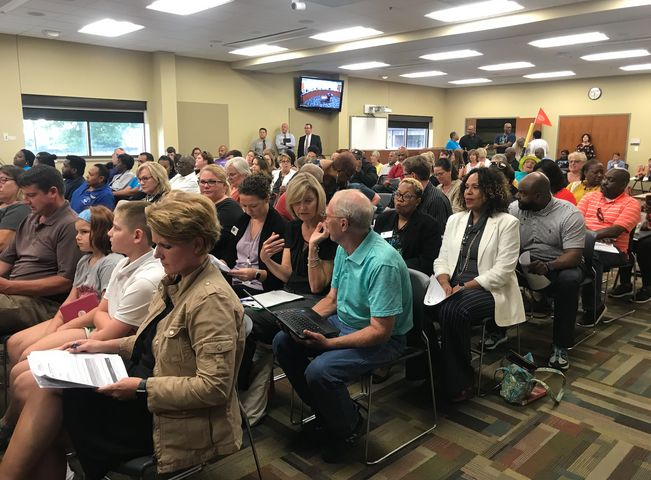 COLUMBIA - Parents and community members advocated for a change to the recording policy in IEP and 504 meetings at the Columbia Public Schools’ board meeting Monday evening.

The current policy does not allow parents to audio or video record meetings when their child's special education plans are determined.

The exception is for parents with a disability. They have to submit a letter to the district ahead of time to request recording privileges.

Michelle Ribaudo is the president of Columbia’s Special Education PTA (SEPTA). Her daughter, Morgan, is on a 504 plan at Mill Creek Elementary School. She is diagnosed with anxiety disorder.

Ribaudo said her daughter’s first few months of school after the family moved to Columbia in 2017 were “miserable" but could have been prevented by recording the initial meeting.

“There was a disagreement about what was actually decided in the meeting,” she said. “It went for months and months without Morgan getting services.”

Without the proper services, Ribaudo said she worried about her daughter every day.

“It’s just awful,” she said. “You feel helpless. You’re trying to do everything you can to make them feel better. You’re forcing them to go to school.”

The Missouri School Boards’ Association (MSBA) makes policy recommendations to the CPS board. Susanne Goldammer is a staff attorney for MSBA and said they oppose an open recording policy.

“Our concern is that if we have recording in the meeting, that’s going to stifle conversation,” Goldammer said.

She said teachers are concerned their “words will be twisted or analyzed very closely.”

However, there is a loophole in Missouri’s wiretapping state law, which allows one-party consent. This means a teacher or parent could decide to secretly record a meeting without informing the other parties in the room.

Both sides of the issue are not in favor of using this option.

“We have so much secretive recording going on,” said Robyn Schelp, president of the Missouri Disability Empowerment Foundation. “Where is the transparency and honesty? That exists with open recording.”

Schelp reached out to politicians about the policy change because she thinks it requires statewide legislation.

Representative Chuck Basye, R-Rocheport, attended the board meeting to show his support of open recording.

“One mother told me that hers [IEP meeting] lasted six hours,” he said. “So to go back, especially if a spouse can’t make a meeting, and relay all that information would be very difficult.”

The board canceled the vote on the open recording policy but still heard over an hour of public comment on the subject.

Towards the end of the meeting, they voted against the addition of the word “unattended” to a policy on seclusion and restraint of a student.