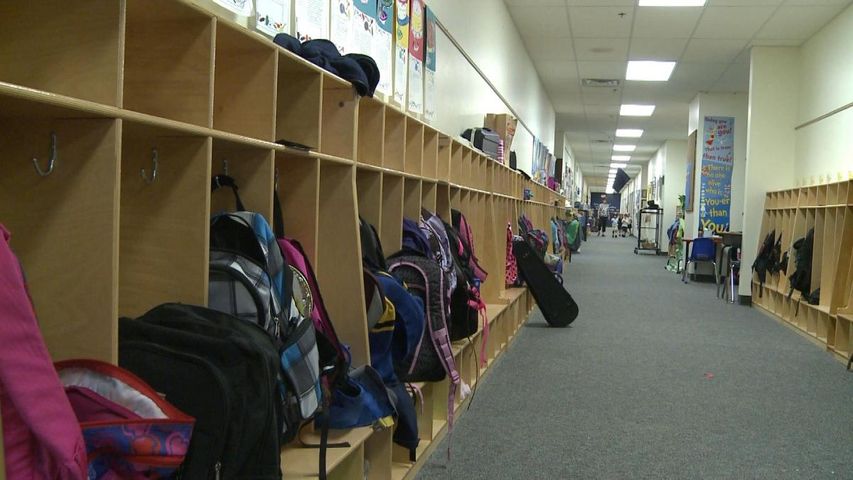 COLUMBIA - Susie Heckels chose to pull her daughter out of Columbia Public Schools after 5th grade and put her in a private school, despite living in a district recognized with the highest level of accreditation it can receive from the state.

Even though the Columbia Public School District achieved its accreditation for the past eight years from the Department of Elementary and Secondary Education, private education is on the rise in Columbia.

"Our daughter's public school experience was extremely positive in many ways," Heckels said. "We were happy with her teachers, but we found with her learning style and the dynamics of the classroom, a lot of the focus would be to steer the class to learn rather than to get right in there to learn right away."

Christian Chapel Academy is just one of seven private schools in Columbia that offer at least Kindergarten through 8th grade. Some of them offer preschool and others offer through 12th grade, but to compare to the elementary schools in Columbia, only the grades K-8 are included in comparison.

Farrington said he's only been at the school for a few months, but he's heard from parents who want to make the change to private school after being in a public school in the area.

"The parents I've talked to are experiencing some difficulties in the public schools whether it's learning or behavior," Farrington said. "The main reason I'm hearing is class size and class dynamics."

Melody Voris, another parent with students at Christian Chapel Academy, said she started her kids in a private education because of the smaller class sizes.

"I know with my children, when you struggle with a particular topic or something, their teacher immediately knows, and they're working together to help that child," Voris said. "When you have 30 students, how do you have a firm handle on everyone's needs and how do you move them forward every day for preparing them for the next grade?"

Michelle Baumstark from Columbia Public Schools said the district is aware of the overcrowding in Columbia public schools.

"The growth in our schools has exceeded the capacities we have in our school buildings and so we need to be proactive with addressing that," Baumstark said.

In order to make that happen, the district has a 10-year finance plan that builds four new public elementary schools in Columbia by 2020. The bonds for the schools have to be voted on every few years. The next $50,000,000 bond will be voted on in the spring of 2014.

Baumstark said even with the growing population, the district maintains the standards set by DESE to keep the number of students in the classrooms at appropriate levels.

"We are seeing a large number of sections of grade," Baumstark said. "We will add another teacher or instructional aid, or we will add an additional teacher to the classroom if that's what we need to do. Or we'll add another classroom of kids and move into a trailer. We've really worked very hard to maintain the appropriate number of students per grade."

One issue parents run into when choosing a school for their child is finances. Many parents cannot afford a private education. And in a highly accredited district, many would think a private education would not be necessary. The Columbia public school district enrollment is completely free, books included.

Heckels said the financials were a a big part of the decision and one of the reasons she didn't send her child to a private school sooner.

"Because you've made that decision to financially commit, I think you're more invested, cause it hits your pocket book," Voris said.

Both Heckels and Voris plan to send their children to Columbia public high schools.

Principal Farrington said Christian Chapel Academy offers up to 50 percent assistance with tuition. He said about 30 percent of students in the school have some sort of financial aid. Susie Heckels said her family receives financial aid for her daughter.

Michelle Baumstark of CPS said nearly 50 percent of students in the Columbia public school district receive free and reduced lunches. The prices for meals through the public schools cost $1.45 for breakfast and varies between $2.60- $3.10 for lunch with an additional $.50 for milk. Those who qualify for free and reduced-price meals pay $.40 for lunch and $.30 for breakfast. Students from families who receive food stamps or Aid to Families with Dependent Children benefits can receive the free or reduced-price meals.

Earlier in the month, Barbara Swanson, a former superintendent of Catholic schools in the Jefferson City diocese, proposed a ballot initiative that would give state tax credits to individuals or businesses who donate to educational foundtions or non-profit groups. Donors would receive a tax credit worth 50 percent of the total dollar amount of their donation.

KOMU 8's Nick Thompson reported that the donations would have to go to foundations that use the funds they raise to improve programs in public schools or to those that use the funds to offer scholarships to students who want to attend private or parochial schools. Donors could also receive the tax credit if they give to a foundation that enhances special education programs for children with disabilities.