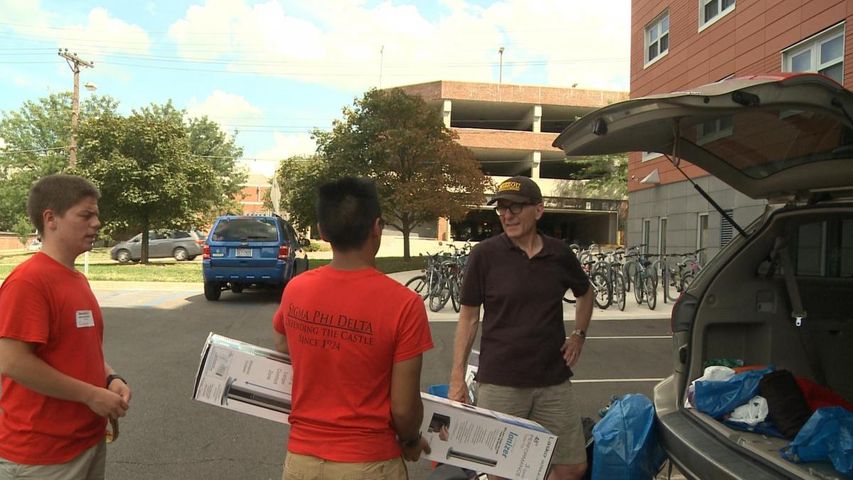 COLUMBIA - Lots of sunshine found its place amongst the mini fridges and snacks from home as new students moved into the University of Missouri residence halls Wednesday afternoon.

The National Weather Service put Boone County under a Heat Advisory through Sunday. KOMU 8 Meteorologist Rosie Newberry said temperatures stayed in the 90s throughout most of the day in Columbia. Despite the heat, parents, students and volunteers worked to get new Tigers settled in to residence halls like the Mark Twain Residence Hall on 5th street.

Peter Keers' daughter moved in for her first year at MU Wednesday. Keers spent the day unloading the van in what he described as sticky and muggy weather. He drove from Minnesota where he said temperatures were at least 20 degrees lower. He said Missouri summers are part of what he and his daughter signed up for when she made her decision to come.

"It's the end of August move-in, and now that we're committed, now we have to endure the best that Missouri can offer," he said. "We were just thinking ‘Oh great, here it is, we're going to be unloading cars and moving into a dorm on one of the hottest days of our summer.'"

Luckily, Keers had some help. Volunteers from the Sigma Phi Delta social engineering fraternity came out to help parents and students move in.

"It's been a long journey but we're getting through it," Clark said. "It was a little bit sweaty."

Clark said he planned to find a swimming pool somewhere in the area as soon as he finished working. He said he wished he brought a pair of sunglasses with him.