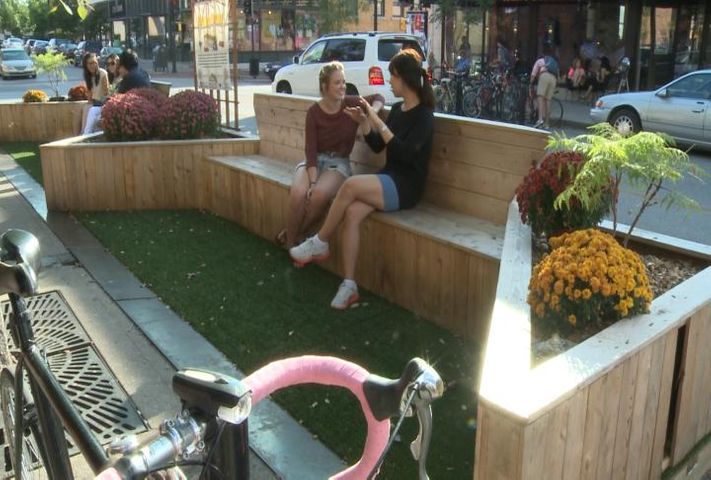 COLUMBIA - A wooden bench and some landscaping, also known as a parklet, is boosting local business sales and providing social space for people passing by Ninth St.

"A parklet is really an extension of the sidewalk and it repurposes utilitarian spaces for public use," Godon said. "It's a temporary green space in an urban setting that provides an opportunity for social gathering spaces."

The Columbia Parks and Recreation Department and local businesses pay for the parklet which moves along Ninth St.

The parklet takes up two-three parking spaces, and businesses that sponsor the parklet or the city must pay that much in meter costs.

The city introduced the parklet in spring of 2013, and it immediately brought good results for businesses, such as Mustard Seed, Sparky's Homemade Ice Cream and Kaldi's Coffee.

"It dramatically increased our sales for Mustard Seed," Mustard Seed's executive director Crystal Midkiff said. "We had a 139% increase just by having the parklets outside."

Sparky's employee Andrew Wilcox said Sparky's is a huge fan of the parklet.

"We had the parklet outside of our business the entire month of August and it was our busiest month in history," Wilcox said.

One Columbia resident told KOMU 8 News he likes the parklet but thinks one is enough.

"That would kind of be a hard situation for people parking," Jacob Morris said. "I've seen this in different places, so it's cool how they put this in different spots, and that way there's not a lot of these taking so many parking spots, but just two or three."

"We lose two parking spaces and we gain hundreds of people sitting outside of our businesses," Cox said.

Godon said the department hopes to hold a parklet design contest in the future as a result of different businesses requesting to have the parklet in front of their businesses.

"We are talking with a couple of businesses and interested parties which would provide more parklets in the community," Godon said.