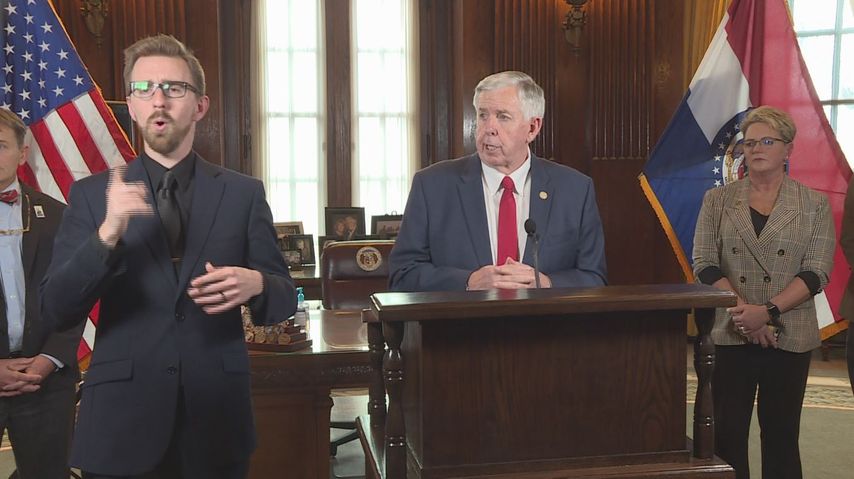 JEFFERSON CITY- For the first time in 27 days, reporters were able to ask questions in-person and follow up in real time with Missouri Gov. Mike Parson on Friday afternoon.

For the past four weeks, Parson has been holding virtual briefings streamed through his facebook page. Reporters have to submit their questions an hour before the briefing and are not able to ask any follow ups.

Parson said the reason for the virtual briefings is to maintain social distancing. At Friday's briefing, reporters and state officials had to stand on black X's on the floor, six feet away from the nearest person.

"One of the things we always talked about is how do we actually do that for press briefing," Gov. Parson said. "It just got to the point where we feel comfortable doing it now."

Parson discussed his plan to reopen the state in phases starting May 4.

"There'll be some set of guidelines, set of rules that will follow," he said. "We plan on the next week or two, with the help of a lot of people around the state, the local officials, the business people and employers, employees, a lot of people have input into that and how we move forward and what those guidelines will look like."

On Friday afternoon, we learned more about the 48,000 KN95 masks that the state has recalled. They were distributed to first responders across the state.

Department of Public Safety Director Sandy Karsten said the state ordered from three vendors. As of Friday, two out of the three vendors agreed to refund the state for what the state paid for them.

From the first vendor, the state ordered 360,000 masks at a price of $1.1 million. They received 88,630 of those masks and the vendor is providing a full refund.

With the second vendor, the state ordered 5 million KN95 masks and paid $8.25 million of the total $16 million dollar bill. None of those masks were delivered and the vendor is refunding the state.

"The bottom line is somebody from another country took advantage of a terrible situation," Gov. Parson said. "All I can say, you know, we got cheated here, we're gonna have to go back out here and try to get our money. We're gonna hold people accountable for it."

The governor said he is glad the state was able to catch the issue.

He also talked about the need to expand testing.

"Testing will become a very important role and how we move forward and I think you're going to see that expand," he said. "I've asked my directors to double out occupancy in the next week to 10 days."