Parson lays down his priorities for his time in office 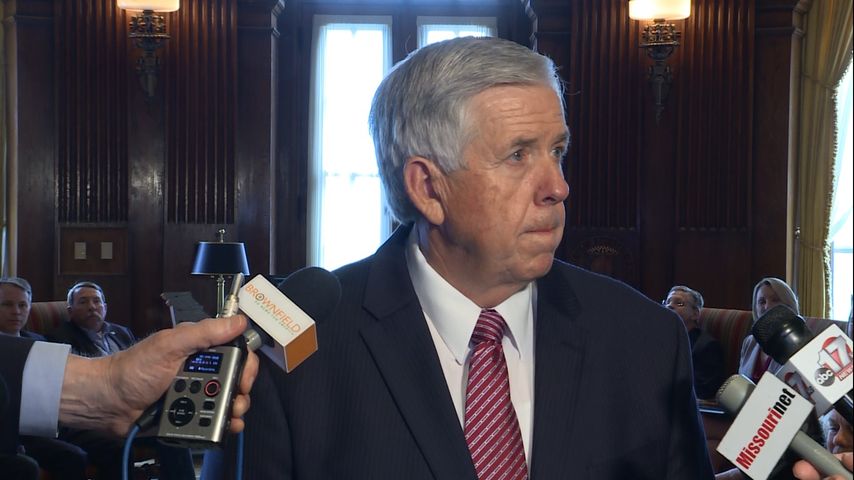 JEFFERSON CITY – On his first full day in office, Gov. Mike Parson said his goal is to bring people together to move Missouri forward.

Parson said he does not anticipate any changes in the cabinet.

"Governor Greitens brought together a good team to the state of Missouri," he said.

Parson said "there is a lot of good things" going on in Missouri.

"We need to continue the things that are good," he said. "You know its going to be a little different day in the governor's office, how I function, but we are going to be working together."

"There's no reason to expect that he was going to turn anybody out of office very quickly," he said. "He'll have plenty of time over the next few weeks and months to decide which cabinet members he wishes to continue working with."

Parson said he is interested in learning about the issues facing Missouri cities. The governor said he intends to do that by meeting with a coalition of mayors from rural and urban areas.

Peverill said that decision is a "nice signal" from the governor, considering the state has many small towns and only two large urban areas, Kansas City and St. Louis.

"I think it's just a way of differentiating himself from his predecessor," he said. "Governor Greitens didn't pay as much attention to the large urban areas. I think Governor Parson, at least initially, would like to indicate that he is open to hearing about the concerns of all Missourians."

Peverill said it is important for the governor to pay attention to the problems happening in urban areas.

"They generate an awful lot of the revenue the state takes, they are the economic engines for the state," he said. "It's important that they operate as well as they can, and that their economies are as healthy as they can be."

Parson said there will be discussions about the necessary process to appoint a new lieutenant governor. He said filling that position is a priority.

"I don't like the state of Missouri being without a lieutenant governor," he said. "For me, I aim to use that position to help with this transition."

The Missouri Constitution does not provide any guidance on how to fill a vacant lieutenant governor’s position. Peverill said Parson could work with legislators to vote on a procedure to do it.

"It would require a special session if he wants to have legislative approval. He would have to give them the charge to undertake that particular task," he said. "And it's something that could be relatively easily accommodated. They could negotiate in advance what they want to do and simply put it through within a single day."

Peverill said he doesn't think the governor would use an executive order to appoint a new lieutenant governor.

"That would leave him open to legal challenge, given the ambiguity in the current state rules," he said. "He probably would like to have the agreement of the legislature just to preempt any potential problems."