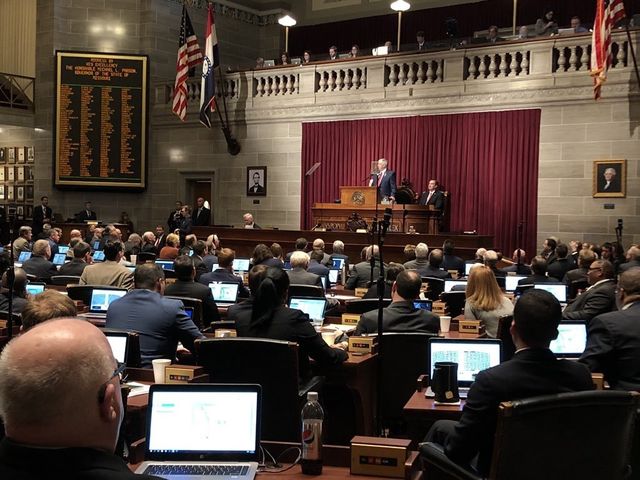 JEFFERSON CITY, Mo. (AP) — Missouri Gov. Mike Parson is proposing a $351 million bond to repair or replace 250 bridges across the state, a pitch he made to lawmakers Wednesday during his first State of the State speech since taking over when his predecessor resigned in scandal last year.

Parson's plan comes after Missouri voters in November shot down a proposed 10-cent-a-gallon increase in the gas tax to pay for road and bridge repairs. Parson toured the state to try to persuade voters to pass the gas tax increase, and he's repeatedly cited improving the state's infrastructure as a top priority.

"Over the years, we have seen proposals go before the voters and fail, but this cannot and does not mean we are expected to do nothing," Parson said in prepared remarks . "This is why I am asking you to consider an infrastructure plan. While funded through our budget savings, it will give us the ability to begin immediate work on nearly 250 bridges across the state of Missouri all in need of critical repair or replacement."

State Budget Director Dan Haug told reporters that the bonding would be paid back with about $30 million in general revenue each year for 15 years. He said this is the first time general revenue would be used to help pay for roads and bridges. The state typically uses earmarked road funds.

All the bridges already are in the state's five-year construction program. That means the bonds would free up existing highway funds to be used for other projects.

Missouri has an estimated $8 billion shortfall over 10 years in its transportation needs, according to the Missouri Department of Transportation. The bonding plan won't wipe that out and the failed gas-tax increase also wouldn't have eliminated it.

"This is about positive movement forward, solving some of the problems," said department Director Patrick McKenna.

"It's not the long-term fix to transportation that we're looking for, but it is a short-term opportunity for us," said Senate President Pro Tem Dave Schatz, who as a lawmaker pushed to put the gas tax on the ballot last year.

Parson also is proposing to use $50 million in state funds for a cost-share program for local road projects that would provide economic benefits.

In his budget plan released Wednesday, Haug said the governor recommended keeping core funding for the state's colleges and universities flat while giving K-12 public schools a roughly $61 million increase next year compared to this fiscal year, which would meet funding goals outlined in state law. That's on top of another $10 million the governor wants to spend on K-12 transportation.

Parson also proposed a new $22 million grant program that could cover up to four semesters of tuition for 16,000 adults annually to get degrees in high-needs areas such as nursing, information technology and other yet-to-be-identified fields.

The budget outlined Wednesday by Parson also would shut down Crossroads Correctional Center in Cameron.

Prisoners and staff would be transferred to Western Missouri Correctional Center, which is also located in Cameron. The savings from the consolidation would help fund pay raises for Department of Corrections personnel above the 3 percent increase proposed for all state workers.

This is Parson's first time outlining a proposed budget and delivering a State of the State address to Missouri's Republican-led Legislature.

This time last year, Parson was serving as lieutenant governor. He took over in June after former Republican Gov. Eric Greitens resigned in the face of potential impeachment over allegations of sexual and political misconduct.

Parson has worked to strike a markedly different tone than Greitens, who openly fought with fellow Republican lawmakers.

Unlike Greitens, Parson previously served as a state lawmaker. That could ease his efforts working with the Legislature to enact his policy priorities into law this session.

"It's always nice to work with somebody who understands that we're three coequal branches of government," Republican House Speaker Elijah Haahr said after Parson spoke. "The biggest thing is trying to figure out where our priorities line up."

But Parson hasn't won over everyone. Democratic Senate Minority Leader Gina Walsh in a prepared response to Parson's speech called for an end to Republican-backed policies that Greitens pushed, such as efforts to enact right-to-work legislation banning mandatory union dues and a recent tax code overhaul.

"Simply being better than Eric Greitens is too low a bar to set for any of our leaders, too low for the kind of change we need," Walsh said. "Missouri deserves better."

House Minority Leader Crystal Quade after Parson's speech said he "highlighted a lot of programs that the Democrats care about, but he neglected to say how he planned to pay for it."