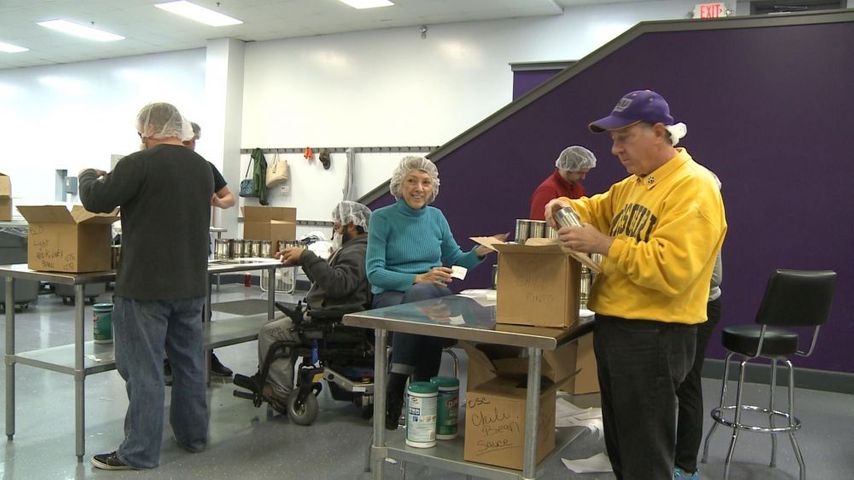 COLUMBIA — The Partnership Against Hunger food drive uses food and fund donations to feed  families in need across mid-Missouri this holiday season.

The Food Bank for Central and Northeast Missouri's Executive Director, Lindsay Lopez says it's one of her favorite days of the year and helps thousands of people.

"The food bank is serving on average about 104,000 people every month in 32 counties, the Partnership Against Hunger goes a long way  toward helping us collect food and funds to make sure people in need have a happy holiday season," Lopez said.

She said many people in mid-Missouri communities need help.

"The reality is that one in every six adults is considered food insecure, or they are struggling with hunger on an ongoing basis, for children that number is one in five. So think about that, one in every five children right here in this community and through out the 32 counties that we serve is struggling," Lopez said.

The drive is Tuesday from 6 a.m. to 6 p.m. at locations all across mid-Missouri.

She said the food bank tries to make it as convenient as possible for people who want to donate.

"In most cases we have the option of people just driving through, they don't even have to get out of their cars. We have terrific volunteers who will be on site as well as staff members who will make dropping food off or funds really really easy for people who decide they want to do that," Lopez said.

Lopez said she appreciates the canned food donations but also that a monetary donation goes a long way in helping feed mid-Missouri.

"I would mention that every dollar we take in, we can actually through our purchasing power turn around and purchase $21 worth of food items for people who are in need. So we can stretch that dollar a long long way," she said.

This is the fifteenth anniversary of the Partnership Against Hunger Food Drive.