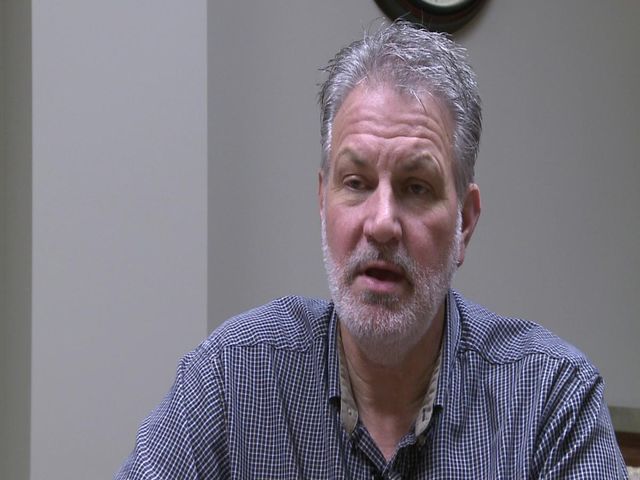 CAMDENTON - A church pastor who says he met once with Bradie Simpson, the mother accused of slashing her infant girl's throat last weekend, said Wednesday the woman came to him in Oct. 2011, claiming she was possessed. Police said she slashed her nine-month-old girl's throat on Saturday.

"When she came into the office, she literally tossed her baby into my arms. At that time, she began to say 'possession, possession'" Bob AuBuchon said.

Pastor AuBuchon of the First Baptist Church in Camdenton said he told Simpson he was a pastor, not a priest, meaning he could not exorcise her. AuBuchon said Simpson was visibly upset and distressed.

"She then put her hand over her mouth and wouldn't say anything," he said. "Later I found out that she had written to one of the officers on a piece of paper that when she opens her mouth, the demons possess her through her mouth."

Aubuchon said Simpson suddenly grabbed the baby and headed out the door. Aubuchon told his secretary to dial 911 while he tried to calm Simpson down.

"She wouldn't audibly talk to me, she just gave me head shakes and yes and no answers."

Aubuchon said he was sitting with Simpson when he spotted a police officer across the street. He said he motioned for her to come over. Simpson then handed the baby over to the officer.

"Bradie began to try and write a note to her, and the police officer asked me to call 911, and I did, again," he said. "They said that there was somebody already dispatched. Sheriff's officers, and police officers, an ambulance, as well as the Department of Social Services."

The Missouri Department of Social Services later subpoenaed AuBuchon to appear in court regarding Simpson. But one day before the court date, AuBuchon said he discovered the matter was settled out of court, and that Simpson was getting the help she needed.

He said news of Saturday's incident surprised him.

"Maybe it was drugs or something, I don't have any idea," he said. "But naturally, it saddened me because I'd held the little girl."

AuBuchon said he had never met Simpson prior to the incident, and had no way of contacting her to make sure she was okay. He said he believes he did everything he could in his power to handle the situation.

"You look back and think, could I have done more? I believe we did all that we could," AuBuchon said. "We knew that there could be some endangerement of the child because it seemed like Bradie was not acting normal by any means."

AuBuchon said he thinks the recent death of the baby's father was one of the reasons why Simpson committed the act.

"She felt she was possessed with demons, which was ridiculous," she said. "I felt like at that time, the child should have been taken away."

"Either get some kind of help, but she sure doesn't need any more children if they can help her," she said. "She needs to be put away for life."

Camden County officials said the state won't try Simpson until she recovers from her own throat wound. Her condition upgraded to good today.