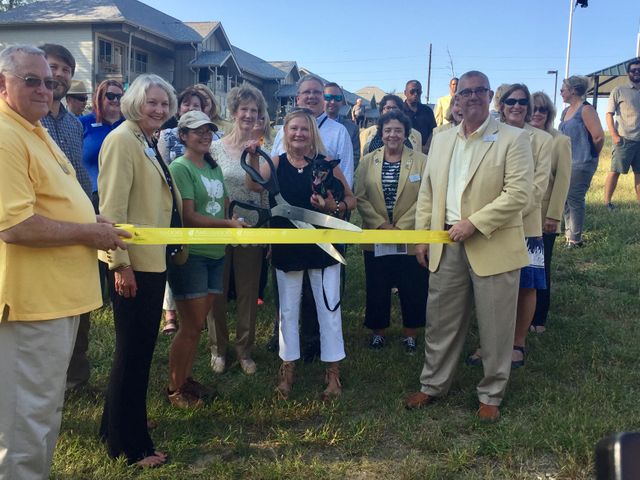 COLUMBIA - Veterans living in the Patriot Place apartments will now have room to take their four-legged friends and their green thumb. Patriot Place dedicated Pooch Park and Patriot Garden Wednesday with a ribbon cutting.

The spaces were built by Columbia Housing Authority. The garden was funded by a $25,000 grant from State Farm. Pooch Park has a separate, unique funding.

Pooch Park was dedicated to Mary Anne McCollum, former mayor and member of the Columbia Housing Authority Board of Commissioners. McCollum won the Howard Lang award in 2016. Along with the award comes a $1,000 stipend. Instead of keeping it for herself, McCollum donated it to Patriot Place to fund Pooch Park.

"I think there is such a strong human-animal bond," McCollum said. "My nephew is in the Marines and animals have always been part of his life. To me, just seeing the interaction, I think it so important and this was just a missing piece at Patriot Place."

McCollum said she was surprised to have Pooch Park dedicated to her.

"When I first said this, it was back in April when I won the Lang award," McCollum said. "Everyone said, 'Oh Mary Anne, we know how much you love animals,' so I decided to donate the money. It was quite a nice surprise to me and really quite overwhelming when my fellow commissioners decided to dedicate it and call it Pooch Park."

McCollum said she didn't forget about veterans who prefer cats.

"We have another organization, Boone County Animal Care, who will be working with our veterans who would like to perhaps foster a cat or kitten. That's something near and dear to my heart."

"We have plans to add an orchard in later this fall," Steinhaus said. "Believe it or not, we have a lot of gardeners out here. All our garden plots are full."

Steinhaus said he's impressed with how residents have made the space their own.

"The guys even made a horseshoe pit down here," Steinhaus said. "It's great to see them really taking advantage of these green spaces."

Patriot Place apartments have been open since April. Steinhaus said the housing authority will listen to tenants and see what other amenities should be added in the future.