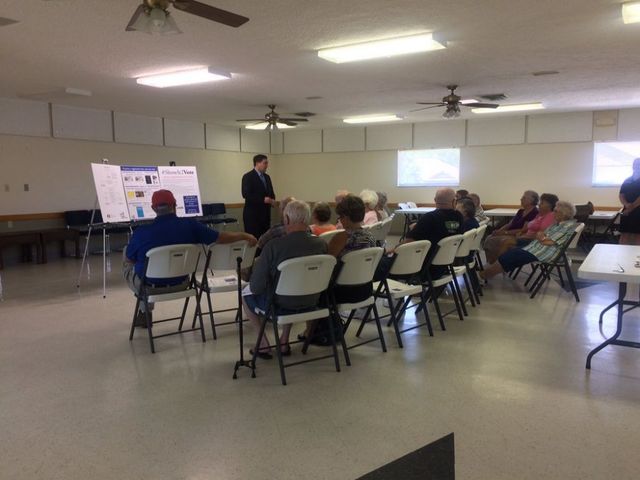 ASHLAND - People expressed their concerns over the new voter identification law on Wednesday at an information session by Secretary of State Jay Ashcroft.

Ashcroft held an information session in Ashland to explain the new voter identification law in the 50th House District before the Aug. 8 special election.

The first session was at the Southern Boone County Senior Center in Ashland on 406 Douglas Drive.

Ashcroft addressed the three options under which anyone who is registered to vote can vote and answered some of the main concerns from audience members.

Missouri's photo ID requirement for voting started on June 1, which means voters will be asked to show a photo ID before they vote. Ashcroft said the forms of identification voters have used previously will work. Ashcroft said the way people register to vote did not change. Ashcroft also said most people don't realize they do not have to prove their identity to register.

Ashcroft said they want people to have a government issued ID, but they do not need to have a photo ID to vote.

Ashcroft said if a voters do not have a photo ID and want one to vote, the Missouri Secretary of State's office will help voters get one for free.

Voters who are registered to vote can vote by showing a government-issued photo ID, sign the provided statement and show one of the following such as a Missouri school ID, utility bill, bank statement, or vote under a provisional ballot.

There are two ways your vote counts under a provisional ballot:

1. If your signature matches the signature in the voter registry

2. If you come back to your polling place and show a photo ID

Ashcroft said an expired license or passport can still be used if it is "recently expired."

Some residents expressed their concerns over the new voter identification law. Some said you still need a photo ID to vote, but Ashcroft said they do not need to have a photo ID to vote because as long as someone is registered to vote, they can vote.

The 50th District seat has been vacant since January after the resignation of State Rep. Caleb Jones. Jones was named the deputy chief of staff for Governor Eric Greitens.

Voters will get to choose between Republican Sara Walsh and Democratic Michela Skelton.

“We want to ensure all eligible Missourians have the opportunity to cast their ballot in August,” Ashcroft said in a release. “We encourage everyone who is eligible to make sure they are registered, and to verify that their voter registration address is current. Remember, if you’re registered, you can vote.”

Voters must be a US citizen, a Missouri resident and 18 years old by the day of the election.

To register, check registration status, or get more information about registering to vote, visit the voters registration’s website.

The second session will be at 6 p.m. in the Moniteau County Library in California on Wednesday.