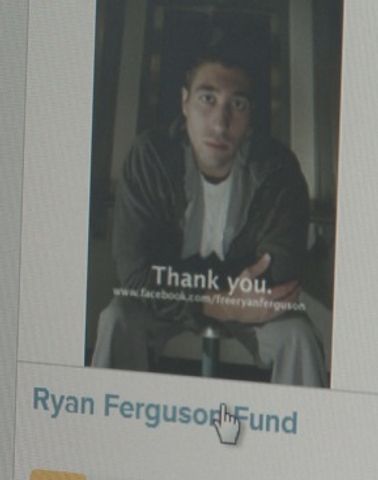 COLUMBIA - After Tuesday's announcement of Ryan Ferguson's release, supporters as far away as Europe have shown their support through donations and reactions on-line.

A San Francisco man, Mike Rognlien, set up a "Free Ryan Ferguson" Facebook page in December 2012. The page started small, but has reached more than 73 thousand "likes." Tuesday, the page got more than 100 new likes.

Rognlien also set up a "Ryan Ferguson Fund" on Fundly.com. As of 9:52 Tuesday morning, the Ryan Ferguson fund was at $16, 633. But as soon as Attorney General Chris Koster's office announced the state would not pursue further action against Ferguson, supporters on Facebook, Twitter, and Fundly reacted with messages of excitement and donations. Here's a timeline of how the donations grew:

After Koster's announcement, the funds jumped every few minutes.

Will Chang is the Senior Product Manager at Fundly. He contacted KOMU 8 News and sent a link of a map showing where all the donations came from across the country.
"We are all really excited about Ryan's release here at Fundly and are trying to do what we can help and support him," Chang said.

The site raised almost $3,000 in the span of five hours. One supporter said he donated money based on the research he's done of the case and felt the need to help Ferguson get his life back on track.

"While his freedom has been all but secured, we (his friends and supporters) want to ensure that he has the financial resources necessary for basics (food/housing/shelter)," Rognlien said on the fundraising website. "And to ensure that he can spend a significant amount of time enjoying life and figuring out what he wants to do next."

"If you're on these pages, there's probably nothing that these Ryan supporters wouldn't do for him so, it's kind of the least we can do," Stuart Dong from San Jose, California said.

Dong acknowledged even though Ferguson's lawyer, Kathleen Zellner, is doing this pro-bono, the family has probably spent a lot of money fighting for Ferguson.

Supporters nationwide called the KOMU 8 newsroom and commented on-line to react to the breaking news.

"I feel great for him, of course, but it's not just that I feel really good for our legal system," Pamela Hogan from San Diego, California said.

One person from Germany tweeted at KOMU 8 News this afternoon.

Rognlien posted on KOMU 8's page and expressed his gratitude for Tuesday's decision.

"Building this page and starting this fundraiser are two of the most important things I have ever done in my life. I didn't know Ryan when this all started a year ago, but he has become a good friend, one I look forward to being able to talk to on a non-recorded line, for longer than 20 minutes at a time, and whenever we both want to talk," he said. "I am proud of him in ways I can't even articulate. This was a good day."