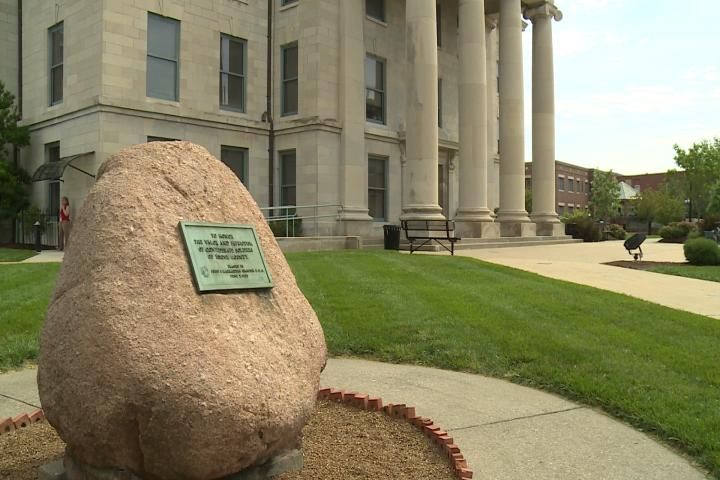 COLUMBIA - A Boone County man was working to get signatures Wednesday for a petition to remove the Confederate rock from the Boone County Courthouse front lawn.

Tommy Thomas III said he started the petition three to four weeks ago after coming across the rock while doing research.

"I did a workshop with Mizzou Athletics called the Student Athlete of Color Experience dealing with diversity, race, those types of issues, with the student athletes and coaches and the athletic department," Thomas said. "And doing some research, I found out about this rock."

Thomas said he thought it was interesting but didn't look any further into it.

"Then one day I was just walking along the street, and I happened to see it right here on the front lawn of the Boone County Courthouse," he said. "And I really have a problem with that because I see it as a symbol of oppression and hate."

In 1974, the Legion of Black Collegians asked to have the rock removed from campus because they saw it as a racist symbol. The city manager at the time, Terry Novak, had the rock removed and asked the court to place it on the courthouse lawn.

On December 6, 1974, Campus Digest said the court voted unanimously to have the rock be placed on the Boone County Courthouse lawn, where it still sits to this day.

The petition says, "If the Confederate rock was moved off the campus of the University of Missouri in 1975 because of controversy, then does it really make sense to have it placed on the grounds of the courthouse for Boone County? No, it does not--and it needs to be removed."

William Berry lives in Columbia and graduated from MU in 1964. He said he remembers when the rock was still at Speaker's Circle. He said he doesn't think there's anything wrong with having the rock at the courthouse because it honors Confederate soldiers from Boone County.

Thomas said he thinks it would be better if the rock were moved someplace else, like a museum.

"I just think there are more appropriate places to put something that has ties to the Confederacy," he said. "If you want to have a museum or something that is dedicated to that then that's fine. But just not on government property, especially not on the front lawn of a place of law. I don't think that's acceptable."

Thomas said he plans on presenting the petition in person to legislators once he gets about 500 signatures.