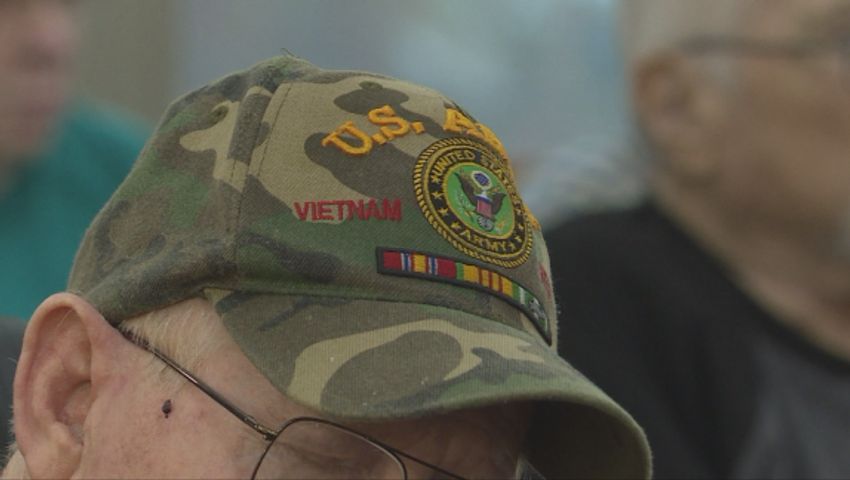 COLUMBIA - More than thirty veterans from three wars - surrounded by stars, stripes, red, white and blue - got special honors Friday at the care facility where they live.

An audience at The Bluffs, a care facility in southeast Columbia, saluted the veterans who served in various wars including World War II, the Vietnam War and the Korean War.

"I wanted to serve my country. I volunteered," said Jim Harding, who served in the Army from 1952-1954 in Germany and Italy. "I would say join up if you haven't already. It's a great experience."

Each veteran received a pin and a certificate thanking them for their service.

"Today was, well, unexpected," said Beck. "All the years that me and the others were in, we were called 'The Forgotten'. So I didn't expect for this to have happened because most of the time it didn't."

After his time in the Navy, Beck served Jefferson City as a fire captain for 41 years.

Beck wrote a book about his time in the Navy called "The Bird Farm Sailor".

Beck made two copies of his book. He holds onto one and he sent the other copy to President Trump.

Harding said he joined the Army to show other people in the world the great things about living in the United State.

"I have traveled a lot. I've been to other countries, and this is a great country to be born in and live in," he said.

He encouraged young men and women to keep fighting for the United States' freedom.

"I would say join if you haven't already," said Harding. "It's a great experience."

Beck said he wanted to serve his country because his family had done so before him. His father served in World War I.

"I was there and I was glad to have done it," he said. "It's the right thing to do for the nation."