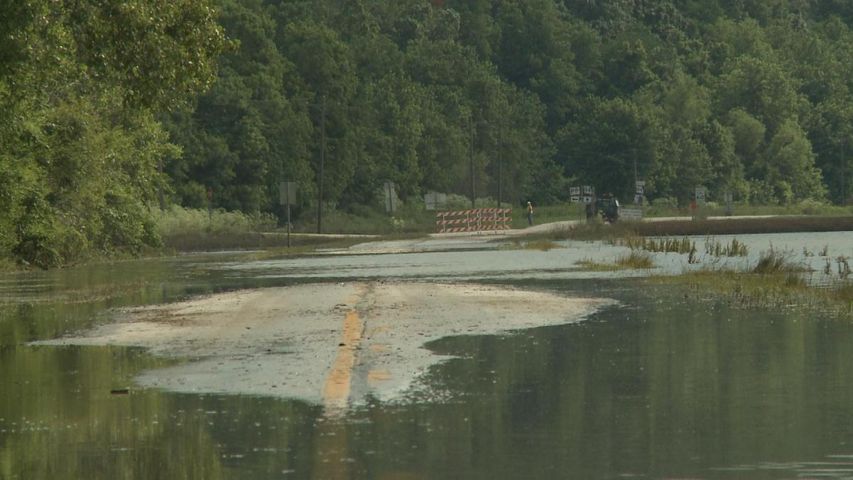 CALLAWAY COUNTY - It's a summer lover's dream. Birds chirping unseen in the lush green trees. Ripples moving lazily over the surface of the water. The shining sun smiling upon the water for a brief moment, turning the water to gold and then hiding behind a cloud to make way for the cool breeze.

To find this waterfront, you need only drive around three "Road Closed" signs along Highway 94 East toward Mokane.

One of the positives of the Missouri River flooding is turning highways into waterfronts.

One of the negatives of the Missouri River flooding is turning highways into waterfronts.

The flooding led Highway 94 between Tebbets and Mokane to close Thursday. Mike Schupp, MoDOT area engineer for Callaway County, said only two pipes handle the overflowing water from the Missouri River along the highway--one of them four feet wide and the other two feet wide. He said the pipes were not blocked, but could only handle so much water at one time. Schupp also credited the flat plane the area sits upon, which prolongs flooding on the highway.

Many commuters using the highway face at least 15-minute detours around the closures using county roads, or longer by using other highways. Some drivers simply moved the orange barricades to brave the flooded highway, and even small cars had little trouble making it through the water. One driver, heading east to Hermann, said he wanted to avoid taking a longer route, and dragged the "Road Closed" sign out of the way.

"If they would put a couple more pipes under the road...the water would drain back out of here quicker," Tebbets resident George Hord said. "Right now, it ought to be lower than what it is, but it just can't drain out quick enough. It won't stop the flooding, but it will help it get out quicker."

Schupp said the pipes in place now can drain heavy rainfall, but can only do so much when the Missouri River begins to flood. The Missouri River reached 30.79 feet on Saturday, a height the National Weather Service considers "major flooding." Located just a mile from the Missouri River, the pipes underneath the closed section of Highway 94 could not maintain continuous drainage of the overflowing water.

Mokane is sandwiched between two road closures along Highway 94. Desra Hockemeyer, co-owner of Mokane Market, said it's a big inconvenience to those driving to Jefferson City or Hermann.

"Say if you live in Mokane, work in Jeff City, [you] have to go to Fulton and hit 54 and go to Jefferson City that way," Hockemeyer said.

But some Mokane residents said after the years of living in the area, the flooded highway poses no problem. Familiarity with the area leads to knowledge of which back roads to take around closures, if it means cutting through friends' pastures. Even Hockemeyer, a lifelong resident of Mokane, said residents fully expect flooding come each spring.