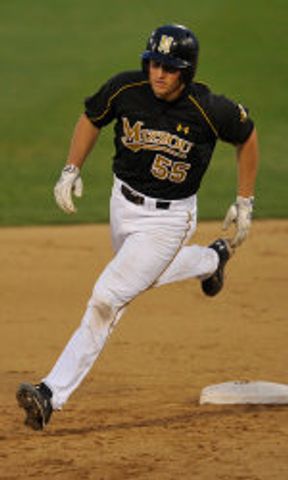 COLUMBIA -- Mizzou (19-17) used a complete team performance to defeat the Kansas State Wildcats by a final score of 13-4 on Friday at Taylor Stadium. Starting pitcher Rob Zastryzny went eight innings and gave up one run on five hits while striking out six batters. Andreas Plackis was a perfect 3-for-3 at the plate with two RBI, scoring twice and reaching base a fourth time on a hit-by-pitch.

Eric Garcia launched a two-run home run in the bottom of the first to take the early 4-0 lead, his second bomb of the season. Outfielders Brannon Champagne and Blake Brown extended their on-base streaks to 28 and 23 games, respectively.

The Wildcats went down in order in the top of the second, then Plackis led off the bottom of the inning with a single to center. Dillon Everett reached on a fielder's choice, then Conner Mach singled to left to put two on with one out. Champagne singled to center, putting runners on the corners and scoring Everett for a 5-0 lead. Turner's fielder's choice scored Mach from third, making the score 6-0 favoring Mizzou as the game headed to the third.

Kansas State put runners on second and third with no outs in the third. Zastryzny induced a flyout to short left and struck out the following batter before an infield single put the Wildcats on the board, cutting the Tigers lead to 6-1.

The Tigers exploded again and eventually took a 13-1 lead. The Wildcats were able to tack on three runs, cutting the Tigers lead to nine. It was all Mizzou, though, and the Tigers ended up winning 13-4.

Mizzou and Kansas State meet again Saturday at 1 PM for the second game of the three-game set.