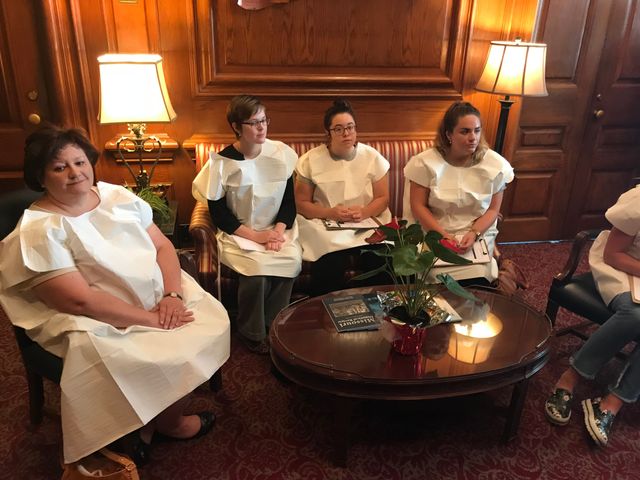 The demonstrators said they gathered because of recent budget cuts to Planned Parenthood.

The group wore white paper examination gowns and held clip boards to symbolize a waiting room. They physically waited in the Governor's reception room for the Governor, or someone from the Governor's office, to listen to their concerns.

Sydney Stephens Planned Parenthood demonstrator said today's demonstration represents the "thousands of people [who] will be left without access to care and they will be waiting in health care limbo."

"Healthcare extends to reproductive care and to deny people to that sort of care because they are lower income, uninsured or under-insured is really a tragedy," Stephens said.

The demonstrators waited in the Governor's waiting room for over an hour Thursday afternoon with no response from the Governor or anyone on his team.

"For the changes to be made and for people to come and hear how we feel about those issues, not only is it frustrating it's a little bit disheartening," Caroline Emmitt said.

KOMU 8 News reached out to the bills' sponsor, Representative Scott Fitzpatrick, as well as Governor Parson, and various other representatives who played a part in the decision. KOMU 8 News did not hear back.