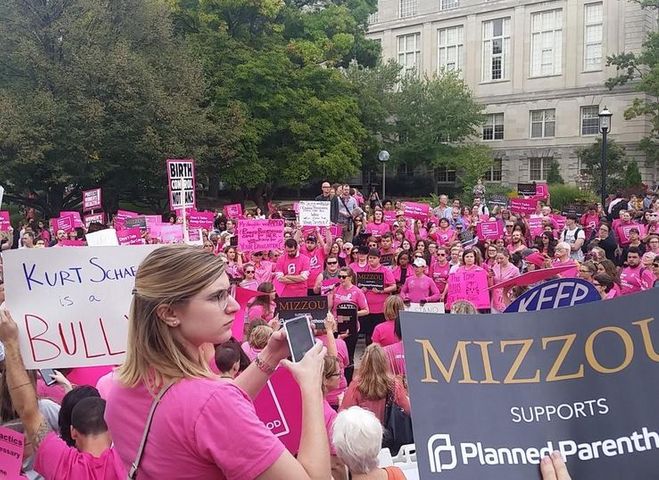 The rally came after MU revoked the hospital's privileges for Colleen McNicholas, a licensed abortion doctor, who was providing the service locally.

The rally lasted about an hour with multiple guest speakers. One speaker at the rally said she was there to speak out against the university.

"It supports our students' autonomy," Jordan Hoyt, MU public health graduate student, said. "We have a right to utilize and express our education in any way we see fit, and there are students who have worked with Planned Parenthood in the past, and we want to support and continue those relationships."

Hoyt said she doesn't find it fair for the university to cut ties with Planned Parenthood with no outside input. She said she hoped people came out to not only support the cause but also better educate themselves on the issue at hand.

"It's important because this could be any issue," Hoyt said. "The university's infringing on our right to choose what we do with our education by cutting off ties with Planned Parenthood."

While a large majority of the supporters were pro-choice, there was also a pro-life group making its presence known at the rally.

Skyler Roundtree, chair of College Republicans, says he and other pro-life supporters went to the rally to give people the other side of the story.

"Speakers circle is all about allowing people to express their point of view," Roundtree said. "We're gonna be providing an alternate perspective on the alternate, downside, of Planned Parenthood."

Roundtree said he just wants people to understand what Planned Parenthood does. He said he was there to stand up for the life of a baby.

Hoyt said she just wants the university to show more support for its students, staff and faculty.