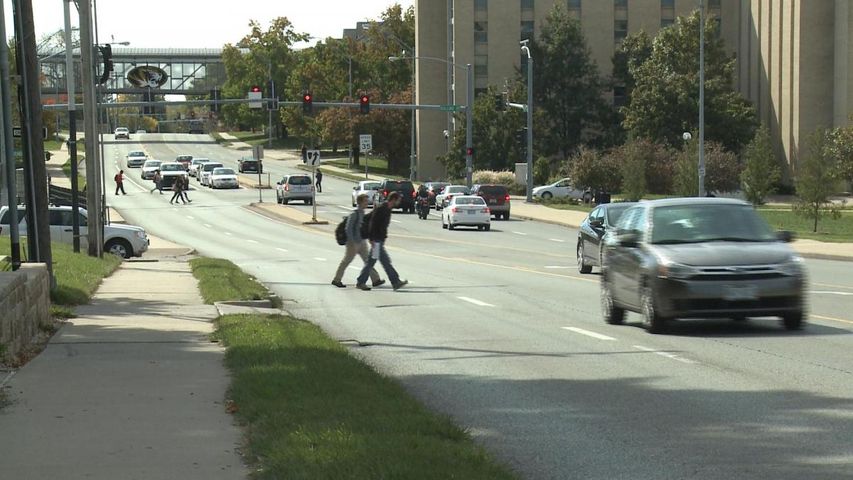 COLUMBIA - It could be the end for thousands of MU students breaking the law on a daily basis if some major changes are made to College Avenue.

Students illegally crossing the four lane state highway has been an issue for years.  Now, the university and the city want to put a stop to the problem.

The main idea is to build a concrete barrier topped with a chain link fence down the middle of College Avenue between Rollins Street and University Avenue.

However, this plan has East Campus residents and students angered and worried about the barrier taking away from the beauty of campus.

John Stansfield, an MU professor living in the East Campus neighborhood, said he thinks the whole idea is dumb.

"It'll give that side of the university sort of a concentration camp vibe," Stansfield said.

The Downtown Leadership Council held a meeting at the end of September to discuss other potential ideas.

Ideas brought up at the meeting included building an overpass like the one near the dorms south of Rollins or bringing the four lanes down to two so cars will go slower.

Students are in favor of simply just adding another crosswalk.

"I think a crosswalk in the middle between Rollins and University would be the best option. I think if you do a barricade people are going to go through it anyway or find a way around it," MU student Bridget Pederson said.

A 2009 MU study showed around 7,000 students crossed College Avenue each day, 5,000 of whom crossed the road illegally.

MU Police said one obvious sollution, handing out tickets to those crossing illegally, would be out of the question.

"There's no way we could line people down through the street to try and stop that from happening," Capt. Brian Weimer said.

Nothing has been decided upon yet but once a plan is in place work on a fix could begin in 2014.