Playing 4 Hope unites MU football with kids who have illnesses 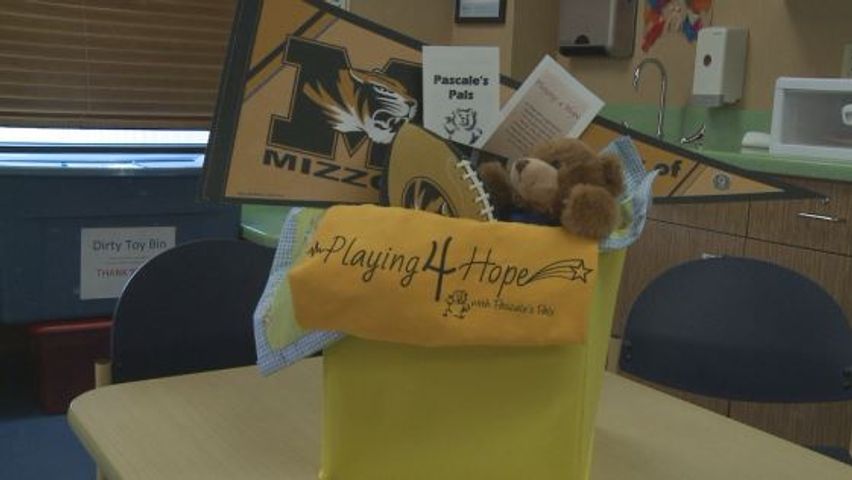 COLUMBIA — A Columbia organization is bringing together the Missouri football team and children who have illnesses.

"Playing 4 Hope," a non-profit organization, has been working with the MU football team and the MU Women and Children's Hospital to unite one player with a young cancer patient before every home football game this season.

"It's a wonderful partnership. Our kids really look forward to these visits," said MU Women and Children's Hospital Child Life coordinator Merideth Lehman. "They get this really amazing smile, and to see that happen is amazing. I've seen kids who are very quiet and having a lot of challenges in the hospital light up when that visit happens."

So far, Charles Harris, Brock Bondurant, Josh Moore, Jake Trump, Jake Hurrel, and Ish Witter have all visited children at the hospital, with more expected to visit in the coming weeks.

The organization was founded by Haley Ennis, who wanted to find a way to connect athletes with people battling cancer, specifically children.

The inspiration for "Playing 4 Hope" was Ennis' grandmother, Donna Joste, who had lung cancer for nine years. When Ennis played soccer at Missouri Valley College, she would wear a wristband with the words "I love you more.". She would kiss it before every game she played to honor her grandmother.

"I wanted to give a chance for athletes to have that feeling," Ennis said. "And, with children, I've always wanted to do something to inspire them. So, it just seemed right."

Joste lost her nine-year battle with cancer in October.

Homecoming week was the first week after her passing that Ennis and "Playing 4 Hope" held an event.

"This is definitely my favorite week of Playing 4 Hope just because it's the week that speaks to her," Ennis said. "Not only was it Homecoming, and the great things that come out of it, but its the connection we have to show for her. She'd be proud."

Witter, who participated during Homecoming week, also has a connection to cancer. His mother passed away from breast cancer when he was 10-years old, leaving him with his dad and brother.

"Knowing I can do something to change a kid's life or maybe help them fight through it even more is pretty cool," Witter said. "This time of the month definitely has me thinking about my mom more and about the kids out there that are fighting through it."

Missouri head football coach Barry Odom said outreach like this is what makes being an athlete at the university special.

"There's so many opportunities that you have during that window of three or four or five years to make a difference in your own life and in someone else's life," Odom said. "And any chance that we get to have an opportunity to be around, especially kids, in our community and make a difference. As a student athlete, you can be one of the greatest ambassadors for your university."

"Playing 4 Hope" looks to continue connecting kids and players together for many years to come.

Lehman said, "I see it really growing and I think there's an opportunity to make an impression on more children."