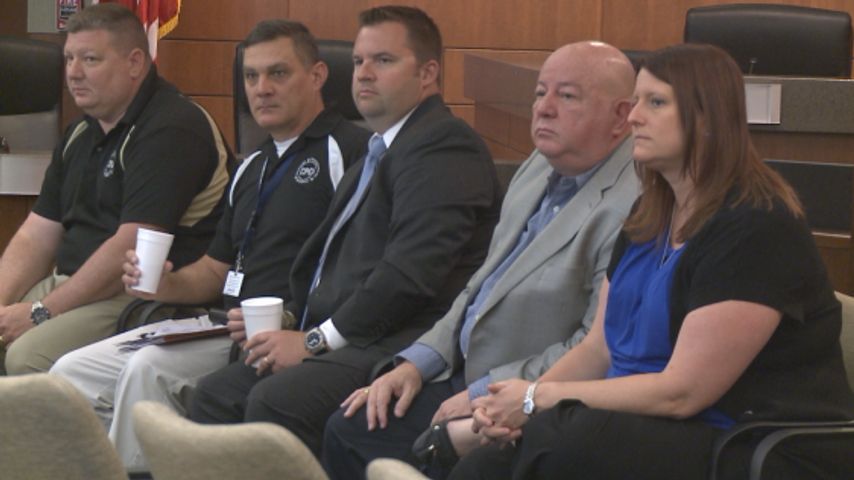 COLUMBIA – The Columbia Police Department held a meeting with local media on Wednesday in the City Council Chambers.

The hour-long meeting included several key topics, but most notable were the discussions on the officer and detective shortage, officer hiring and retention, the racial disparity index, and new body cameras.

“We are short in patrol by a number of officers. Department-wide, my estimate is we’re short by at least 50 officers,” said Chief Kenneth Burton. “The simple reality is we need more boots on the street.”

Burton said getting more officers is a tough task, and it is nobody’s fault that CPD is understaffed. He said the city grew very quickly, and the department did not grow at the same pace.

CPD command staff said the shortage causes each detective to have an average caseload of 45-60 cases, which is nearly twice the national average.

“We’re playing a game of catch up now,” Burton said.

CPD is attempting to catch up by constantly looking to hire new officers.

“We’re recruiting every day,” said Assistant Chief Brian Richenberger. “We’re still finding quality applicants, just not in the volume we had 10 to 15 years ago.”

Deputy Chief Jill Schlude said CPD is not the only department experiencing fewer applicants. She said there are a number of factors that have led to this decrease.

“I think a lot of the glamor and the sexiness of law enforcement has been taken away,” she said. “I think people take a step back and say ‘ok, do I really want to enter this part of public service.'”

Burton said CPD has not had much of an issue keeping officers after they are hired. He said the few officers that have left did so due to personal reasons, such as retirement or family needs, rather than dissatisfaction with the department.

“I think we do a pretty good job of keeping them,” Burton said. “The only exception to that would be people that come in the door with the intent of getting a few years experience here then going somewhere else.”

Topics discussed included the racial disparity index showing that black drivers in Columbia are pulled over nearly three times more often than their share of the population.

Burton said the report released by the Attorney General’s office can be very misleading.

“I think it’s a bunch of numbers based on very limited information. There are a lot of assumptions that our department is racist because of that number, but that number by itself does not mean anything,” Burton said. “You have to look at why the stop is made, and a lot more information to take into account.”

CPD is continuing with TASER, which provides the cameras, and Gordon said the new models will be a benefit for the officers without affecting the budget.

“They’ve taken officers’ suggestions and command staff, and have integrated those into the second-generation cameras. The best thing for us is we’re getting rid of cameras that are two years old, and we get brand new cameras for free,” he said.

When CPD originally purchased the cameras, it cost over $100,000. This deal will be free for CPD due to TASER trading new cameras to the department in order to supply the first-generation cameras to other departments.