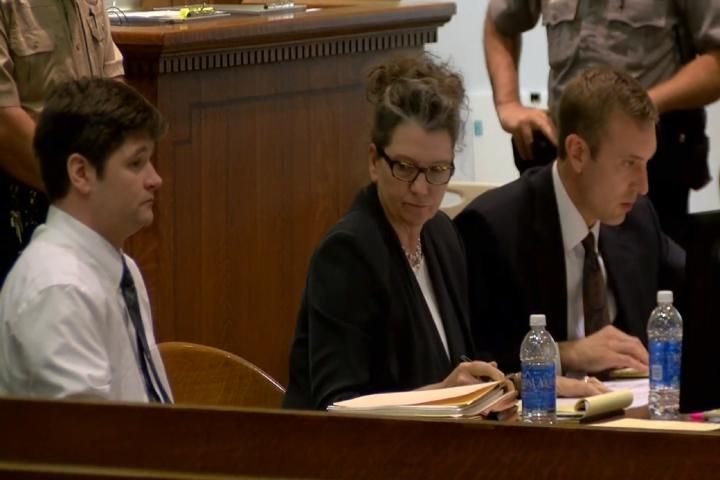 COLUMBIA - Prosecutors began calling witnesses Wednesday during day two of the trial of Cody Baker. Baker, 33, is charged with second-degree murder. He and his girlfriend, Anna Steele are accused in connection with the death of Steele's 8-month-old child in Steele's Columbia home in 2014.

Mueller and Nelson testified and confirmed evidence such as photos of the crime scene and bloody clothing found on the scene. The lab worker confirmed the substances found on the clothing were blood and DNA. They could not say whose DNA was found on the bloody clothes. Mueller was the first officer to arrive on scene on Woodridge Drive on February 28, 2014.

The prosecution then called Mary Case to the stand as an expert witness. Case is the St. Louis County chief medical examiner. She said that abusive head trauma in a young child usually means it was inflicted by someone else, and that it usually happens behind closed doors.

According to court documents, 24-year-old Anna Steele reported that her 8-month-old daughter Finely Steele was not breathing and called 911.

Steele's charges related to her child's death. Those charges were downgraded to child abuse or neglect and endangering the welfare of a child.

Anna told police two weeks before the incident Finely had a bruise on her face that Baker claimed happened when the child fell in the crib. Anna told police that the infant was in danger but did not want to confront Baker. Baker's trial started on Tuesday.

Prosecution stated on Tuesday Baker suffered from insomnia, needed sleep and was disgruntled that Finely wake him.

The defense team said on Tuesday their plan is to find holes in the prosecution's story line.

The prosecution team said Anna was asleep during the night when Finely died. The defense team said they have texts exchanged between Anna and her mother during the time when Anna said she was asleep.

Judge Jodie Asel is presiding over the trial in Boone County court.

Man Accused in Murder of 8-Month-Old Pleads Not Guilty