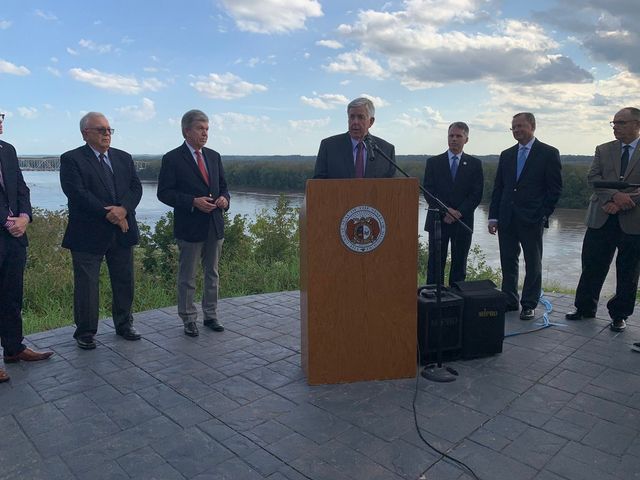 ROCHEPORT- As construction begins on the new Missouri River Bridge in Rocheport, federal, state, and local Mid-Missouri leaders gathered Wednesday afternoon to thank those who helped secure the funding to replace the bridge.

In July, the federal government granted the state of Missouri $81.2 million for the project.

MoDOT is adding $87.1 billion and surrounding cities and counties are contributing an additional $4.2 million.

"This bridge is truly about the state of Missouri," Governor Parson said. "It is about the lifeblood, lifeline going across the State of Missouri through I 70 when you look at the transportation and economic growth."

If Mo-DOT was not able to get enough funding to replace the bridge officials say they would have had to rehabilitate it.

"That work would have had a devastating impact not only on the surrounding communities but the entire state and region," McKenna said. "We were predicting snarled traffic in both directions of three to eight hours. It would have been intolerable for cross country travelers, businesses and residents."

The money from the grant will not only allow Mo-DOT to replace the bridge but it will trigger a bonding program that will repair an additional 215 bridges throughout the state.

"It was not easy, it never is to do things like this, Rowden said. "But they are necessary, important functional moments where we will look back 20 or 30 years from now and recognize the importance of this moment and this project."

"Without this bridge, we would have been economically devastated for so long in so many ways."