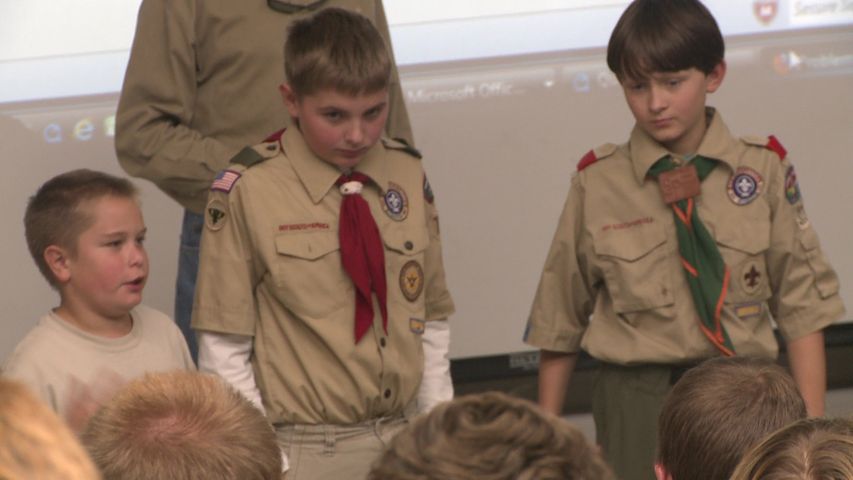 COLUMBIA - The Boy Scouts of America will vote this month on a proposal that would allow gay youth membership, but ban gay adults--a vote that has divided conservatives and liberals, religious and gay groups.

The vote could potentially allow gay scouts to earn their Eagle Scouts award, but have it taken away when they turn eighteen.

The proposal was announced on April 19. The Boy Scouts initially planned on lifting the ban on both gay scout masters and gay members, but conservatives and religious groups objected.

In Columbia, Boy Scouts of America Great Rivers Council executive Doug Callahan said the discussion will continue regardless of how the votes go.

"I doubt it will resolve everything," Callahan said. "The Boy Scouts have been in the largest listening phase or listening process than we've been in our history that started back in February."

Jeffrey Stevens, who is gay, said the proposal is outrageous.

A Gallup poll taken in October 2012 indicates 3.4 percent of U.S. adults identify as lesbian, gay, bisexual or transgender (LGBT). The poll was taken among 120,000 Americans. The Gallup Poll also indicated younger groups are more likely to identify as LGBT, with 6.4 percent of Americans aged 18 to 29, identifying as LGBT.

The poll also highlights young women as being more open than young men, with 8.3 percent of women and 4.6 percent of men indicating they are LGBT.

For Columbia resident and Kansas City native "Buckey" (who would not give his real name), the vote is not permanent. Buckey has been a Boy Scout ranger and identifies as a poly-gender--a person who is born one gender, but thinks he should be the other gender.

"Regardless of whether or not it passes now, my generation and the generations to come, it's eventually going to pass," Buckey said. "Once my generation starts becoming the upper leadership that makes all these rules, the values will change."

Buckey grew up doing Boy Scouts. He earned the Eagle Scouts honor in Kansas City and worked for two years in New Mexico.

According to the Boy Scouts of America, the Eagle Scouts honor has always been special. Only five percent of all Boy Scouts earn the award.

"One of my fears in coming out and kind of living as trans or poly-gender is that this award that I worked so hard for, the Eagle Scout award, will simply be taken away," Buckey said. "I spent years of my life working for this and I don't want somebody else to be able to say ‘No, all of this stuff that you worked so hard for, that you did, means nothing now because you believe this one small thing.'"

Buckey mentioned his childhood leader as being opposed to gays. He said that leader was his biggest mentor despite his open disapproval of gays.

As for Callahan, he said the Boy Scouts of America have a very diverse membership within its Boy Scout troops.

Buckey said his fear of coming out strongly exists in his native area of Kansas City.

Buckey said he spent eighteen years working for the award. He also said he has considered giving up his award because of the scouts' disapproval.

The vote will face the National Council in Dallas on May 20. If approved, the new policy will take effect on January 1, 2014.