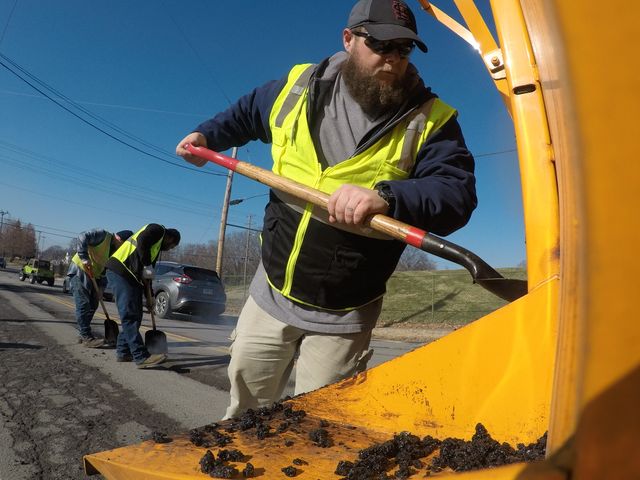 COLUMBIA - Damages to cars can hurt the bank for anyone, and this winter is hitting some badly. Potholes have been popping up around the city and crews were out working on Tuesday with warm weather allowing repairs.

MODOT crews can be found on major roads and highways, while the City of Columbia monitors and repairs 13,050 lane miles of total streets in Columbia.

Barry Dalton with the City of Columbia Public Works said it's not unusual to feel new potholes this time of year.

"The extreme changes in temperature and water that gets under the pavement," Dalton said. "And then the additional stress from the blades of the plow and additional traffic causes potholes."

Dalton said repair crews are on the roads as long as snow isn't covering the routes.

"Residents report potholes to us and when that happens we send out a crew as fast as we can. Depending on the weather and resource availability at the time. But we try to be there within 24 hours," said Dalton.

One complication is the multi-use nature of the trucks. Not only do crews use them for repairs, but when it snows those same trucks are mounted with spreaders and plows.

"It is a little bit unusual for us to be able to go out and patch potholes this time of year," Dalton said, adding they patch potholes year-round but are unable to when there is snow or ice covering the roadways.

It's already too late for some drivers. Auto technicians at A to Z Auto Repair said they can see anywhere for $200 to up to $1,000 in damages.

"With a pothole you can see a tire blow, bent rim. But some damages you can't see as easy as the strut. The strut is the shock for the front. And it can damage the seals and blow that out," said auto technician Steve Heimericks. "If they're hitting enough potholes it can release the fluids and the gas as it charges struts and allows them to work. Most often on potholes you see damage to wheels and tires."

He said those struts can cost someone up to $800 alone.