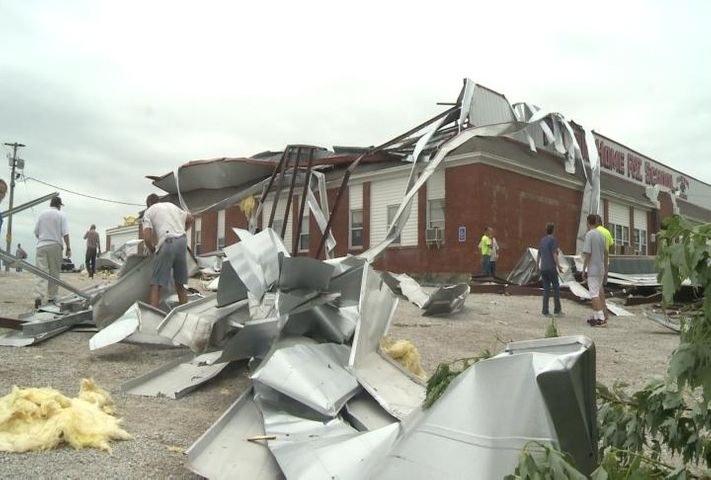 Neighbors in the area said the storm hit the school around 4:30 Wednesday morning.

"School isn't in session, we were out two weeks ago and teachers finished up last week," said Patrick Tray, the school's principal. "It's a great blessing that nothing really happened, other than damages inside and out."

People in the area claim a microburst, or a localized column of sinking air caused by a small and intense downdraft within a thunderstorm, hit the area. Microbursts do not spin like tornadoes, but can cause significant damage.

The metal "secondary roof" was an addition to the school's original flat roof.

Tray got a call that the school had been damaged around 6:30 Wednesday morning and by the time he arrived, the community had already gathered to help.

"Before I said "could you please do something?" I had people running down the halls, carting things out of rooms that were damaged," Tray said.

Jackie Patton has lived in Prairie Home for 43 years and has long family ties to the school.

"My children went to school here, my grandson graduated from Prairie Home High School, and now I have four great-grandchildren going to Prairie Home," Patton said.

Patton and nearly 150 other people helped clean debris from the school grounds.