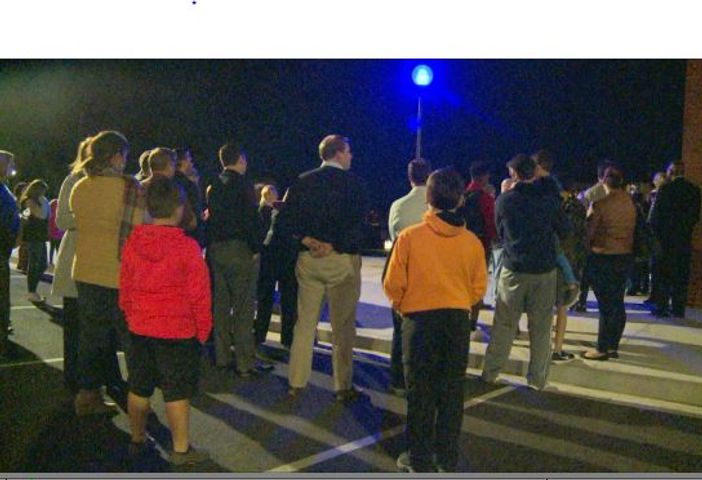 JEFFERSON CITY - Jefferson City High School students, parents and friends came together for a prayer vigil Thursday night for Zachary Johnson and Lilly Gore at the Boys and Girls Club in Jefferson City.
The two were last seen by their parents Monday between 8 p.m. and 10 p.m., according to Captain Doug Shoemaker of the Jefferson City Police Department. Their parents reported them missing Tuesday morning to police.
Johnson, 17, is on the football team and plays tight end. Gore, 15, was in the marching band. The two were reported missing Tuesday. Friends said Johnson and Gore are dating.
Jefferson City High School student body President Katelyn Sluder said Gore's family and friends found out she was missing when she didn't show up for work.
"She worked at West Main [Pizza]," Sluder said. "She didn't show up to work and that's when they got worried."
Josh Vilchez is a friend of Zachary.
"Zach was with Isaiah (a friend of Johnson) and I Monday night before we took him home for dinner," Vilchez said. "When we found out he was for sure gone with his girlfriend Lilly. He seemed fine. He seemed more than fine. We didn't end on a bad note. We were recording at Isaiah's house and I don't know why out of nowhere he would just leave."
Dylann Green is also a friend of Johnson.
Green said, "I don't know what they're going through really. But whatever, they can get through it. Everyone's missing you."
Sluder said Johnson and Gore have been dating for about eight months.
"So I know they know each other well and she always seemed super happy when she was talking about him," Sluder said. "But she was always in like AP classes, a good student, involved. Lilly was all around a good student."
Sluder said right now everyone is worried and hoping for the best.
"They're both well-rounded," Sluder said. "So it seems scary and weird that they disappeared. Especially that it happened at our school, so it's just scary that it happened here."
Cole Gresham said Johnson is a great person to be around.
"There's no one else that makes you smile when your down in the dumps," Gresham said.
Isaiah Briggs said Johnson is like a brother to him.
"He's been my best friend since we were six or seven years old," Briggs said. "We went to elementary school together. I've done everything with him. And he's a major part of my life. I don't know what to do without him. He's like my brother."
Briggs said when he found out that Johnson was missing, "at that moment, I sat down and couldn't function."
Briggs said he just wants his friend to come home.
"If I could say something to him, I'd just want him to know that all of these people here they care for him," Briggs said. "At times, he doesn't see past tomorrow and see he has a bright future. And all of us just want them home here with us."
Max Hanrahan has been friends with Johnson since the sixth grade.
"Every time me and Zach would hang out it was just a blast," Hanrahan said. "He was a fun person to be around. He was fun and exciting. Tough at times, but you know, who isn't."
Hanrahan said Johnson needs to come home.
"He's just in his own head right now," Hanrahan said. "I don't think he knows what he's leaving behind. I don't think he knows what he's missing out on as far as not being here.
For his friends and family, it's very traumatizing."
Hanrahan said Johnson was disconnected recently.
"He would just get really down on himself and he would walk out on us sometimes, just walk out of the room never tell anyone why," Hanrahan said. "Isaiah is always the first one to go after him."
Jefferson City police believe the teens stole Gore's mother's car, a green Jeep Liberty with the license plate FP8D1J.