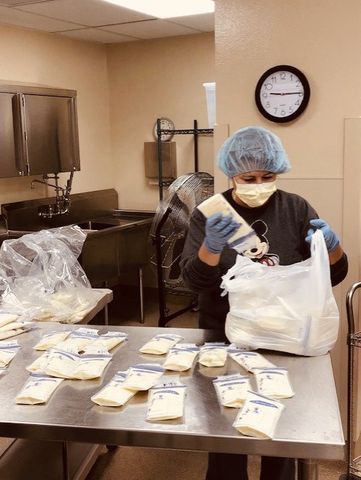 JEFFERSON CITY – The Central Missouri Mother's Milk Depot opened in early spring of 2019. Now, as premature baby rates continue to rise, it is stressing the importance of donated milk.

The United States received a “C” on the March of Dimes report card, with an overall premature rate of 10%.

However, the state of Missouri ranked even worse, receiving a D+ and having a pre-term rate of 10.7%.

And this is where the Central Missouri Mother's Milk Depot is looking to help act as a middle man of sorts.

The depot is “a collection site for woman to bring their extra express breast milk here so we can store it and then ship it to the milk bank in Kansas City,” director Melinda Ridenhour said.

When mothers have premature babies, they often have trouble producing their own breast milk.

Jennifer Hanford is a neo-nurse practitioner in the MU Health Care newborn intensive health care unit. She said she sees this all the time.

“When babies are in the NICU, the moms are under a lot of stress, so stress definitely impacts the ability to produce breaks and produce that full supply,” she said.

This milk is important to pre-term babies because they “are at a much higher risk for infection, developmental delay and issues with growth,” Hanford said.

While premature babies can use formula milk, breast milk is a better alternative.

“Some of the big impacts that donor milk and human milk can have on the pre-term babies is the decreased risk of infection, the decrease of necrotizing enterocolitis - which is an infection in the intestines of babies," Hanford said. "It can cause a lot of morbidity, and mortality death is a big risk of that infection.”

Since opening in April, the Central Missouri Mother's Milk Depot has seen about 14 donations, according to Ridenhour.

Those donations are equal to about 8,000 ounces of milk, which could potentially reach up to 24,000 premature babies, she said.

Terry Smith knows the importance of donated milk. She had her daughter Rebekah on October 1, 2019, a little over 2 months earlier than expected. After struggling with preeclampsia, doctors decided that it was best to deliver her at 29 weeks and 3 days.

“I was scared, fearful, my biggest one was I didn’t want her to die,” Smith said after finding out she would be delivering her baby early.

It’s been about a month since Rebekah was born, and her mother now depends on donated breast milk.

Smith said she had never thought about the importance of donated milk until Rebekah was born.

“I didn't really ever think anything about it before, but now that I have a child who uses it, its super important to me," she said. "Because of my ability to not be able to produce enough for her, I know she’s getting the nutrition that she needs.”

In the meantime, the Central Missouri Mother's Milk Depot is continuing to encourage people to donate milk.