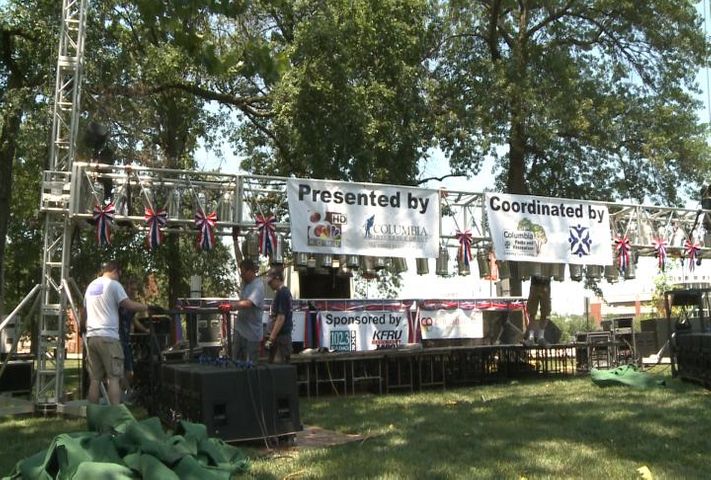 COLUMBIA - Flags are flying, two stages are now standing, and people are preparing for Thursday night's Fire in the Sky celebration.

This is the 61st annual Fourth of July celebration in Columbia. The free entertainment begins at 6:30 p.m. with free music at Peace Park, children's activities at Flat Branch Park, and an entertainment stage at Flat Branch Park. The firework show begins at 9:15 p.m. The fireworks will be launched from the parking garage at Sixth and Cherry Streets.

Event Director Karen Chandler said the fireworks will be launched high above the parking garage, and should be visible from Peace Park, Flat Branch Park, and most of the downtown area.

"People last year said it's one of the best shows they've ever seen. I think it's because we have smaller fireworks and more fireworks than we did at the stadium so it's a constant show, with lots of fireworks going off, one right after the next," Chandler said.

Chandler said there has been a lot of preparation for this event because of the big turnout last year.

"Last year we estimated between 20,000 and 25,000 people came out in downtown Columbia. We're tweaking some of the logistics to make sure everything flows correctly," Chandler said.

4th Street from Locust to Cherry will close starting at 3 p.m. Police will guide traffic after the fireworks show, and some streets may be made one direction only to help with the traffic.

For more information on parking and street closings click here.