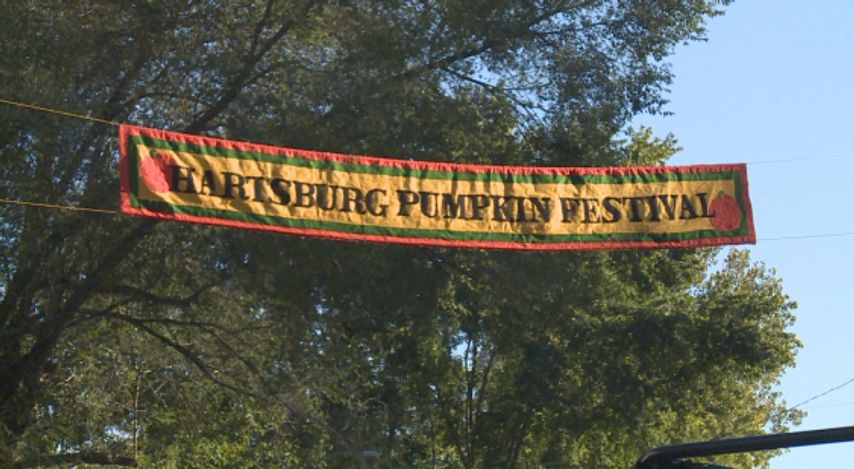 HARTSBURG - The small town of 106 people will get approximately 50,000 visitors this weekend.

The 26th annual Hartsburg Pumpkin Festival runs Saturday to Sunday from 9 am to 5 pm.

The festivals' committee members started preparations Thursday by painting lines on the ground indicating where the vendors will set-up, where to put the hay bales, and where the information booth is. "Today we were marking booths for the upcoming vendors to be able to find where they're supposed to be located at," Hartsburg Festival Committee Member Jeri Cooper said.

While painting lines on asphalt may seem easy, Cooper said it's actually the toughest part. Measuring spots for vendors booths and making sure they don't block sidewalks or driveways lead to a confusing yet comical afternoon filled with questions like, "Are you sure?" "This one?" "No, I think it's this way."

Cooper understands that traffic has been a problem in the past. "It's not anything that we can fix being that we're a small town and we only have certain ways in and certain ways out." Cooper said. "We don't have much options of that, so we recommend coming early, enjoying the festival and leaving late."

"We do give back to the community, we do do things for the landowners and the people that we use their yards," Martin said. "The money that we get from the vendors we turn back around and give it to the community, whether it be building a new playground or any kind of improvement."

Cooper has served on the committee for 10 years and has attended the festival for over 15 years. Cooper said the festival is, "Amazing, it's not anything anybody can understand until you've see it."

Cooper said some vendors show up Friday to get a head start on setting up and some come from out-of-state.

The weather is always different during the festival, "Some years it's nice and some years it's cold, so we kind of brace for both and take what we get," Cooper said.

"I just love seeing all the people enjoying the small-town feel and getting to experience that because many of these people have never seen anything like this before," Cooper said.

The festival began in 1991 by Hartsburg residents to support the local pumpkin farmers. The first festival started with about 20 booths and 1,500 people.