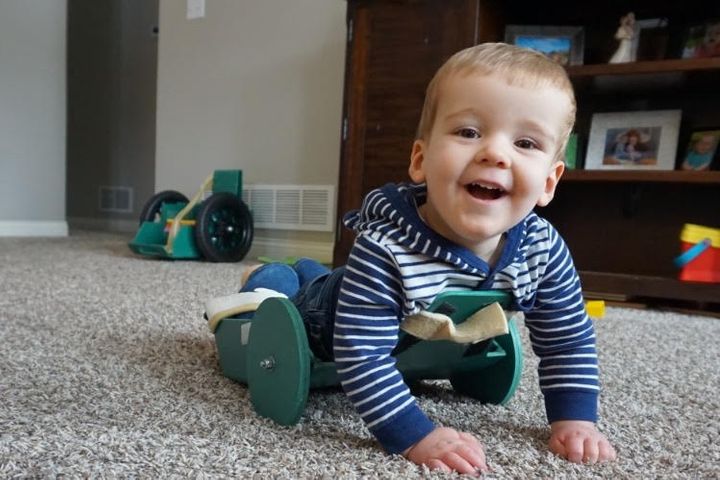 CENTRALIA – Brody Moreland smiles, laughs and gets into mischief just like any other curious 2-year-old.

But how he moves around his home is very unique.

Brody was born with spina bifida. Basically, he is paralyzed from his ribcage down.

For the first part of his life, it was a chore just to roll over.

"He laid there. He couldn't get to his toys," Brody’s father Taylor said.

This was life as Brody knew it, until Taylor took matters into his own hands.

Taylor made Brody a contraption now known as The Frog. It’s a device with an arched board on two wheels. A child lays stomach down on the board and can pull themselves forward with their hands.

“He kind of looked like a frog whenever he was using both arms, just kind of hopping along,” Taylor said.

KOMU 8 News profiled the Moreland family in May.

After that story, other outlets looked into Brody’s life after being given the gift of mobility. The Moreland’s were just starting to make The Frogs for other children.

Months later, the family has grown in some unimaginable ways.

After KOMU reported on their story, other outlets like Buzzfeed News, Good Morning America, PEOPLE and more picked up the story. So the Moreland’s side business picked up, too.

Brody went from crawling with The Frog to now sitting with the Moreland’s latest invention, the GoBro—short for Go Brody.

The GoBro functions as a toddler wheelchair. The Moreland’s are looking to start making these devices for other children in the coming months.

As for Brody’s health, Ally said she finally feels at peace knowing he is in stable health with good doctors and physical therapists.

Also, The Frog business is taking off.

“We were getting 70 frog orders in two days, and it’s like how are we going to do this?” Ally questioned.

The family works nights and weekends taking orders and making Frogs. The devices are sold to children with mobility issues across the nation, even the world.

It’s the chance at an international award—all for a Centralia family and son.

“Just the impact he’s been able to have in his two and half years on the hundreds of kids now—and thousands in the future—that just Brody being Brody, you know, he’s going to impact,” Taylor said.

Taylor said their even looking to bring engineers into the family-run business to increase production.

While the family is working round the clock, they find a reward in every video and picture from their customers.

“It’s hectic and you question ‘man is it worth it?’” Taylor asked. “Then you’ll open the video and see a parent so grateful their kid can finally move, and it’s wow. Yeah, it’s definitely worth it.”

With a growing boy and business, it’s only fitting the family grows as well.

Ally and Taylor had Brett Moreland on Sept. 11 this year.

“Brody loves him,” Taylor said. “He’s going to be a pretty good big brother, I think.”

“I think in the future it will be really helpful to have a brother to help him out,” Ally said.

The family is facing more change than ever. But not all change is bad.

“It’s way better than I could ever have dreamed it could be,” Taylor said. “Just him as a son and having our Frog takeoff as it has. You never know what to expect.”

Taylor is working on his next invention, which is a standing device. As of now, the device is only for Brody’s use, but Taylor may start selling it to other families.