Pro-Confederate rally held in Boonville on I-70 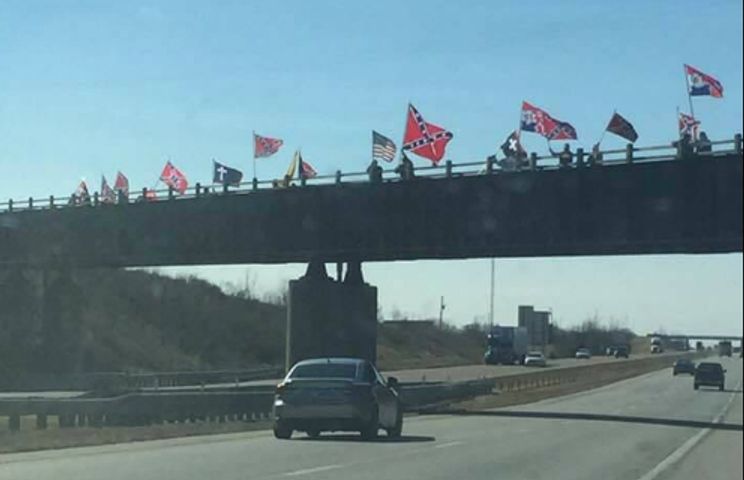 BOONVILLE - Trawny Brown has called Boonville her home since 1975.

That's exactly why she said she was so shocked to see something for the first time in her small city on Saturday.

"As I was getting ready to leave town to go visit family, that's when I saw it," Brown said.

"I saw a line of people up on Katy Trail and they had a multitude of flags representing the Confederacy. There was also a white and black flag that represented Christianity, but has been associated with the white supremacist movement since the late 20th century," Brown said.

Brown said she was so surprised by what she saw, she pulled over to the side of the interstate and got out of her car.

"It was shocking to see that, especially when you see the Boonville exit signs right next to the demonstration," Brown said. "People are going to affiliate it with my community and that's detrimental on many levels."

Several other local residents agree, including Trea Pinkett. The 22-year-old preschool teacher said he's lived in Boonville since he was born in the city, which made what he saw even more shocking.

"I woke up at 11:30 in the morning on Saturday to a whole bunch of honking. The highway and Katy Trail are right behind my house, so I just looked out my door and saw a whole bunch of people along the bridge with Confederate flags," Pinkett said.

"I was scared. I was shaken," he said. "I didn't know what to do because you're not used to seeing that. Normally you're used to seeing it on Facebook videos and on the news, but you never thought you would see it walking out your back door."

Brown is the president of Concerned Citizens for a Better Community (CCBC) of Boonville, a local service organization located in the city's former segregated school. She said the organization originates from a local fight against racial inequality - a societal struggle she's seen overcome in Boonville.

"We are one of three former segregated schools that are still functioning in a community capacity. We have reclaimed our history and are serving our community through it," Brown said.

However, the group who organized the pro-Confederate demonstration said it's a misunderstanding and that race has nothing to do with their actions.

"We are, believe it or not, a non-racial, non-political, non-sectarian organization which are descendents of Confederate soldiers," Travis Archie, a spokesman for the Sons of Confederate Veterans (Missouri Division), said.

Archie said the organization was founded in 1896 to help take care of former Confederate soldiers. Today, the group has a different role.

"We are now the guardians of their history. It's important to tell the truth about the complexities of the war," Archie said.

"Slavery was a national sin. People in the 19th-century were backwards, as far as their views on equality and none of us at all believe in owning another human being, or that sort. But our opinion is that there is much more to Confederate history than that," Archie said.

Adding context to Confederate history is the reason the group demonstrated in Boonville, according to Archie.

"There is significance there, as far as the history of the area, being in the Little Dixie area," he said.

"We're not pining for the days of slavery or anything of that sort, but we want people to understand that there is more to Southern history than the bad."

Archie said the group's members welcome and seek dialogue with anyone who disagrees with their goals or believes they're racist.

"Come talk to us. Come have an actual, open conversation with us and we might change your mind. I personally realize and understand that the battle flag has baggage. But I can also understand that there is a tremendous complexity to it."

"You have the spectrum from the redneck, good ol' boys who just see it as a symbol of defiance, a rural lifestyle. On the other hand, you have the hateful people that we do not associate with. We have a very clear hate policy in our organization's constitution that forbids people from being in those groups or expressing sentiments that those groups would express," Archie said.

Brown said she's open to discussion with anyone in Boonville's community and disagrees with the group's interpretation of history.

"Telling the truth in history is important to me," she said. "So if you want to use your love of Confederate history as a tool to talk about the horrible conditions of history, let's do that. If you want to talk about how upholding states rights meant the subjugation of an entire race based on color and nothing else, let's talk about that history."

"But to celebrate in some form, as if it was this grand time? That's not a celebration of history. That is putting your own spin on something for your own perspective," Brown said. "If we're going to talk about preserving history, let's make sure we preserve it correctly in the right context, truthfully talk about how significantly that hurts so many people on so many levels, and how those symbols are still hurtful today."