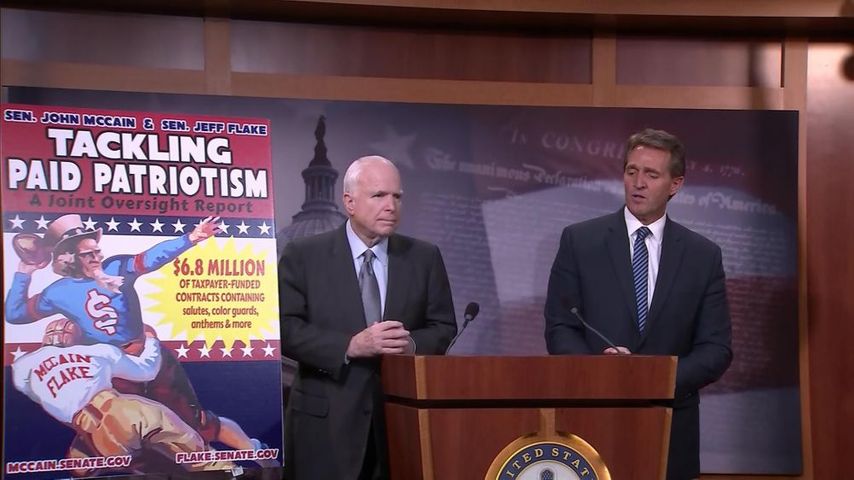 COLUMBIA - The Department of Defense has been paying professional sports teams by using tax payers dollars to honor the military, according to a report conducted by U.S. Senators John McCain and Jeff Flake.

"I think it was a source of embarrassment for the DOD because some of these activities involved a pat on the back for the military or appreciation ceremony. to find out and have people know it was paid for just doesn't sit very well," Flake said.

The report shows that about $6.8 million dollars of taxpayer-funded contracts contained some sort of paid patriotism which includes salutes, color guards, anthems and much more since 2012.

"I think it will be entirely appropriate for the sports teams that were provided these fundings, the taxpayer's dollars, to donate that money to a worthy cause," Senator McCain said in a press conference.

While this investigation was focused more around professional sports, KOMU 8 News asked Chad Moller of the MU Athletic department if they received any money for honoring military members at football games. He provided us with a statement.

"I don't think we have received any money," he said.

One Chiefs fan was not too happy when he found this out.

"They've already got all these people in the stadium for the football event anyway. Shouldn't they be philanthropic about it and just do it for free or just enough to meet the costs to promote these people," said Nick Case.

The senators appreciate all that sports do to honor these troops, but they should be done in a different way.

"There's a lot of good things that professional sports do to honor the men and women who serve in the military. But these millions of dollars are not acceptable for those expenditures of taxpayer's dollars," McCain said.