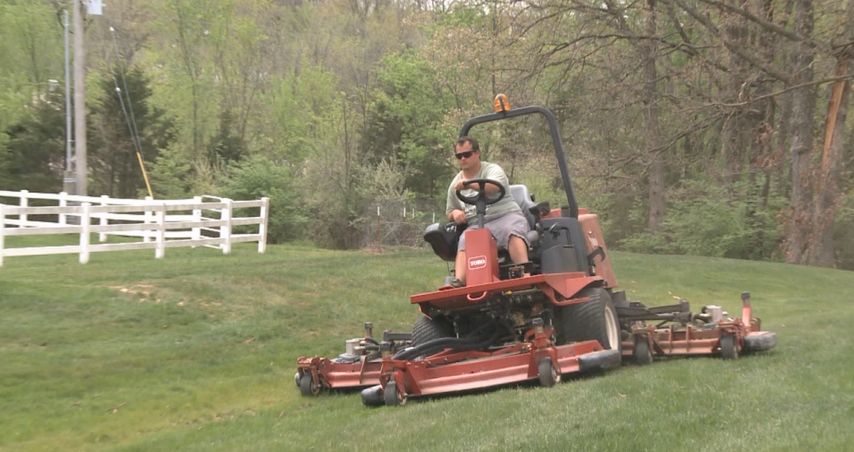 LINN – The “Wall of Fame” at the State Technical College of Missouri is littered with names associated with the likes of the St. Louis Cardinals, The MLS New York Red Bulls and the Minnesota Vikings. But not a single student has taken a swing, kicked a ball or thrown a pass.

“We started a couple years ago. Anybody who worked at a professional or even minor league gets a flag up on the wall,” Linn Tech Commercial Turf and Grounds Management Department Chair Nick Rackers said.

State Tech offers a two-year program in commercial turf and grounds management, which provides students the opportunity to gain real-life experience.  The campus is fixed with a 360-acres for the students to maintain and a 12,000-foot equipment facility to for them to utilize.

That real life experience has provided current student Brendan Browne with the tools to succeed once he graduates in August, and the “Wall of Fame” has Browne’s sights set high.

“You learn everything you need to learn [and] you get hands-on time with the equipment,” Browne said. “I want to work on a grounds crew at a baseball team, so it was really cool seeing that a bunch of other [former] students had gone and worked for and gotten internships for major league programs.”

Adam Archer is one of those former students.

“I knew that St. Louis was where I was going to be once school was finished, and I’ve had a goal as long as I can remember to be on the Cardinals ground crew,” Archer said. “I think that the companies around the country are starting to recognize that Linn State is becoming a very good place to get high quality employees from.”

Archer’s new home is Busch Stadium, where he works as a grounds crewmember for the St. Louis Cardinals. His work speaks for itself, but he attributes the majority of his success at Linn Tech to his teachers.

“[The teachers] set us up through the internships, and you have kids that go there that actually want to work and want to do the hands-on stuff,” Archer said. “They’re very determined too. It looks good for them.”

“It’s good recognition for the student,” Rackers said. “I’m not going to give myself the credit for them getting those jobs. They apply for them.”

Rackers said he looks forward to this upcoming fall. A handful of his students will work at Bellerive Country Club in St. Louis, Missouri for the PGA Championship.

But for now his current students still have dreams in sight, which could edge their own names on the wall of fame.