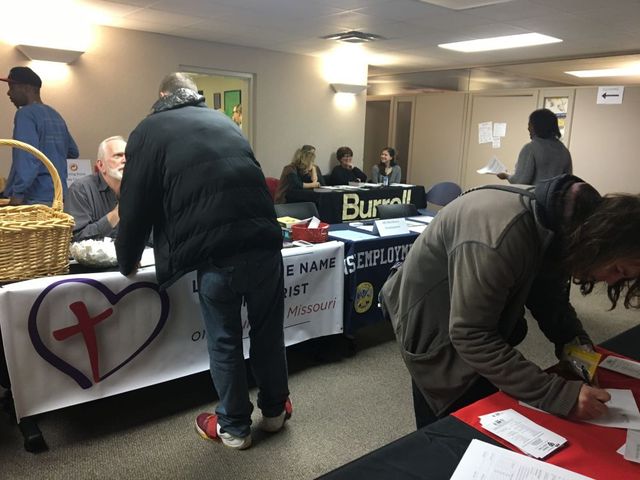 COLUMBIA - Individuals and families experiencing homelessness in Columbia stopped by the Family Impact Center on Tuesday to participate in Project Homeless Connect, a bi-annual event hosted by the City of Columbia and the Boone County Basic Needs Coalition.

"It runs the gamut," said Bill Cantin, the neighborhood communications coordinator for the City of Columbia. "We have health services - MedZou is here, doing medical checks, we have HIV testing, but we also have haircuts, we're providing food for folks, and backpacks and clothes." In addition, the event received donations of personal hygiene products.

One homeless man, Sam Bonnarens, attended the event for the first time, at the urging of his housing community, which has lost all of its state funding.

"As soon as the governor went into office, they called an emergency meeting and told us. So we ain't got no more funding," Bonnarens said.

He said the hardest struggle of homelessness is trying to find income.

Cantin estimated about 100 people participated in this year's winter Project Homeless Connect. "On one hand its good, that we’re able to help that many people, but on the other hand we have over 100 people who are experiencing homelessness in our community that are here that we’re trying to help."

Cantin said the coalition wants to raise local awareness of those who are struggling with homelessness.

"It's a way to give back to the community. Also, we're all people, no matter what socio-economic level we're at. And so it's a way to acknowledge people's basic human dignity and to be here for folks who need help," Cantin said.

Project Homeless Connect, a national best practice model, seeks to provide health and human services for the homeless. According to the United States Interagency Council on Homelessness, communities across the United States have adopted this model. This is the ninth year of hosting the event in Columbia.

Cantin said members of the Basic Needs Coalition originally had heard of the program's success in San Francisco.

"So we just decided one day we were going to bring that to Columbia, and combine it with our efforts in the point-in-time count, which we have to do with the state to keep track of how many homeless individuals we have in town," Cantin said. "We found that by combining the count with this event, we get a more accurate count of folks out there, and also what needs and services we need to bring."