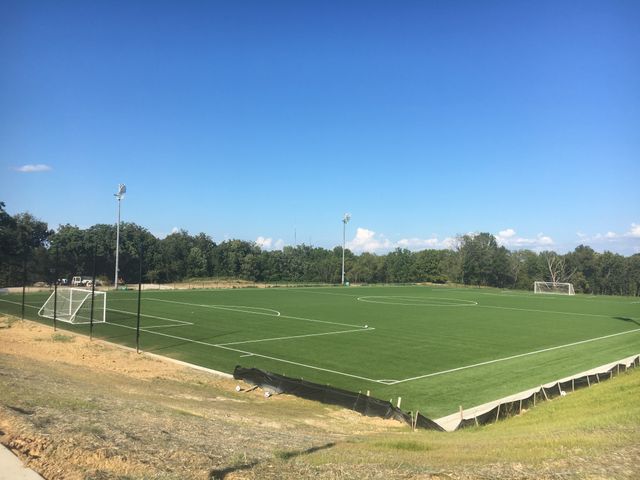 BOONVILLE - Six soccer fields, five turf fields and one natural grass championship field are on the verge of completion near Boonville High School. The name of the project: Project Pele.

The City of Boonville announced the addition of the six fields back in 2015. The project is nearly complete but could take until the rest of the year to be officially completed with sidewalks connecting each field.

The Boonville High School soccer team currently uses the fields for practice and home matches, and head soccer coach Kaz James enjoys the convenience of having six state of the art fields in her own backyard.

"These fields are unlike anything I've ever played on before," James said. "To be able to practice on them everyday and have them as our home field is awesome."

City leaders said Boonville is typically known as a baseball town, so the addition of a soccer complex hopes to boost soccer participation among youth.

"What happened is we started looking and there’s a lot of baseball complexes around, particularly in central Missouri so we started thinking that we wouldn’t have the competitive advantage," said project manager and assistant to the city administrator Kate Fjell.

"Everybody is having to go to the south or to the ends of the state border, so for us, being right in the center we thought this is perfect," Fjell said. "Nobody wants to go all the way to Kansas City from St. Louis or vice versa, so just come right here in the middle.”

However, the project isn't just about soccer; it also looks to benefit local businesses.

“It’s difficult for a small business this day in age because we are becoming such a digital friendly society wehre everything is online and you kind of really get out of touch with the small town business," said Boonville Director of Tourism Katie Gibson. "So, I think the local businesses will be really excited to continue to have more ways of bringing outside tourism and visitors into the town and get to see what a beautiful community we have here."

"We’re certainly hoping we’ll get another hotel. That’s one thing and we don’t have enough infrastructure for. We don’t have enough rooms in Boonville right now for a large tournament. They would have to go over to Columbia right now to stay so hopefully we’ll get that. But also, restauants, maybe some sporting goods stores," Fjell added.

The fields are also durable and weather resistant. Several leagues and colleges have already made calls expressing its interests to play matches in Boonville.

"This is really like what the FIFA teams are playing on," Gibson said. It's much more durable and gives a much more natural grass feel where the ball rolls much more evenly and it does make a big difference in the long run. We’ve already had, collegiate teams that are wanting to come in and play as well, so this will be a great experience for the town to have; it’s such a state of the art complex.”

The tournaments that the city hopes to bring in will likely be played on weekends. With a large amount of people coming from all over the state to play, Fjell hopes they will take the time to explore all Boonville has to offer.

"I think for sure we see this supporting some of the small business in our community," Fjell said. "If they’re here over the weekend they’re going to want to have something else to do so maybe they’ll go to the pool. Maybe they’ll come down to our visitor’s center and see what we have to offer. Maybe they’ll rent a bike and ride on the Katy Trail for a bit."