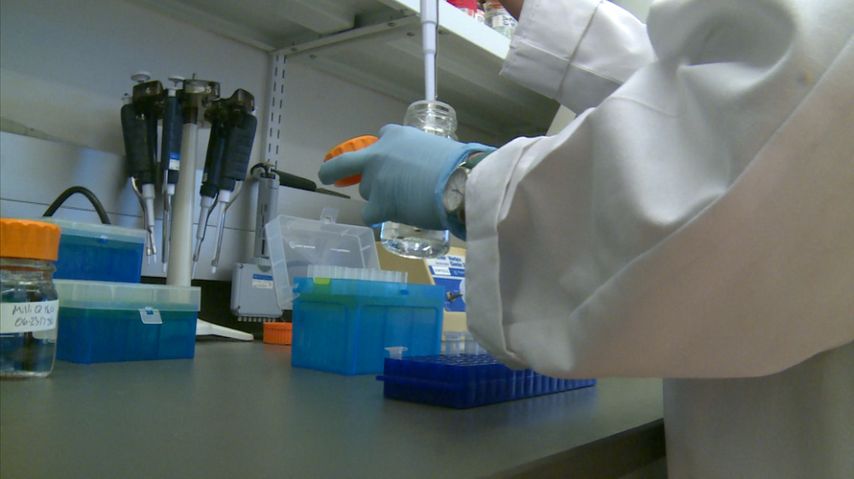 COLUMBIA – The University of Missouri is partnering with a Columbia-based company to fight a familiar condition in cancer patients.

The university's Veterinary Center is teaming up with biotechnical company Tensive Controls to test its drug that treats the effects of a syndrome called cachexia.

“Cachexia anorexia syndrome is a devastating end-stage of many different disease processes,” MU Associate Veterinary Professor Sandra Bechtel said. “What it leads to is a decline in appetite, then leading to lethargy, weight loss, and a decrease in muscle mass and an overall decline in quality of life.”

Bechtel said about 50 percent of people in late-stage cancer experience these symptoms of cachexia. She also said dogs develop diseases very similarly to humans, which is why Tensive Controls is currently testing the drug on canines.

Tensive Controls Lab Director Brittany Angle put her dog, Bubba, in the drug trial in August of 2016 when he started to show signs of cachexia.

“I enrolled Bubba in this trial because I noticed he gradually started losing a lot of weight,” Angle said. “He became very bony, he wasn’t eating well, he was hardly drinking any water, and he really just didn’t want to do anything at all.”

After taking the drug for nine months, Angle said Bubba gained weight and muscle mass, and his body condition and appetite improved.

“Within three or four days of being on the drug I noticed an immediate improvement in appetite, and in water intake, and activity level,” Angle said. “It is remarkable how quickly it works. Weight gain was a little more gradual, but he was happy, he was eating – I was happy.”

Bechtel said the other two dogs in the provisonal MU trial also showed similar improvements on the drug, and Gruber said he hopes the canine trial can end in about two years.

"Once we finish the veterinary trial, we’ll be able to have a body of evidence to support our human application as well," Gruber said.

As for potential side effects, Bechtel said the only major one they have found so far is a change in fur color.