Protest in Auxvasse calling for chief of police resignation 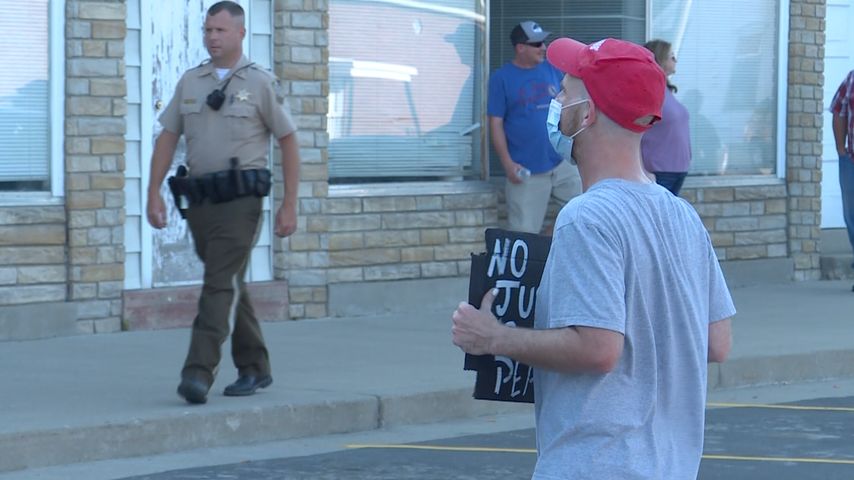 AUXVASSE – Around 30 people protested in Auxvasse Friday night, calling for the resignation of Police Chief Kevin Suedmeyer. They are speaking out after the police chief was reinstated following an internal investigation of his social media.

Aleigha Turner, a resident of Auxvasse, organized the nonviolent protest at 6 p.m. on Friday, June 26.

“It’s a good way to show our community we are going to stick together and stick through this,” Turner said. “We are pointing out these wrongs, and they’re going to be brought to light. And everyone should know about them.”

According to previous KOMU 8 News reporting, Suedmeyer was placed on administrative leave on June 11 after a citizen complained about posts on Suedmeyer’s personal Facebook page that were made from late May into early June.

Turner provided screenshots of the posts to KOMU 8 News. They included comments about protesters standing in the roadway blocking traffic, saying “you deserve to be run over. That will help clean up the gene pool” and “I certainly won’t stop for them – though if they insist – I’ll identify myself – they can back down or get shot.”

Mayor Tom Henage and the Board of Aldermen investigated the complaint about the posts. Alderperson Danielle Huddleston and Ashley Stieinbeck voted against reinstatement. Aldermen Bret Barnes and Gary Westerman voted for reinstatement. Mayor Henage swung the vote in favor of reinstatement.

As of June 12, Suedmeyer was reinstated as police chief with a “verbal warning,” according to a statement from the City of Auxvasse.

People gathered outside the elementary school in Auxvasse and marched to the court house speaking out against this decision.

“These comments from anyone in the community—let alone a chief—are very disturbing and very shocking for anyone to hear,” Turner said.

Suedmeyer did not work the protest. Other law enforcement blocked off streets to protect those marching and those counter-protesting.

Turner hoped the protest would pressure Suedmeyer to resign or be fired.

“I want him to resign immediately,” she said. “I want to get the word out about voting out the wrong people on the wrong side of history.”

Other protesters, like April DeTienne, just wanted a response.

“Be a man of integrity like the position that you hold says that you are and say ‘I’m human. I made a mistake. I’m here to make the change,’” DeTienne said. “And I will be happy with that. Will that change everything? No. But it would help support the fact that change needs to be made.”

DeTienne said she spoke at the protest because she had no reason to fear counter-protesters as a white woman.

“Most of my friends that are of color have texted me or called me in the last day saying ‘I can’t come April because I’m afraid,’” she said. “And that is why I have to come. I don’t have the luxury of not coming because I do care about them.”

In planning the protest, Turner said she has faced threats and racist slurs—actions she’s never endured before in Auxvasse.

“I’ve never had a racial slur directed directly at me until I announced I was doing this protest,” Turner said. “That’s when it really started.”

Despite some pushback she’s received from the community, Turner said this protest is the first step of many.

Turner is in talks with Jefferson City’s NAACP chapter.

Columbia businesses don't have to refuse service to unmasked customers
COLUMBIA—About 20 people filed complaints about other individuals or businesses not following the mask ordinance this weekend, according to the... More >>
19 hours ago Monday, July 13 2020 Jul 13, 2020 Monday, July 13, 2020 7:19:00 PM CDT July 13, 2020 in News
Share:
Email
Facebook
Twitter