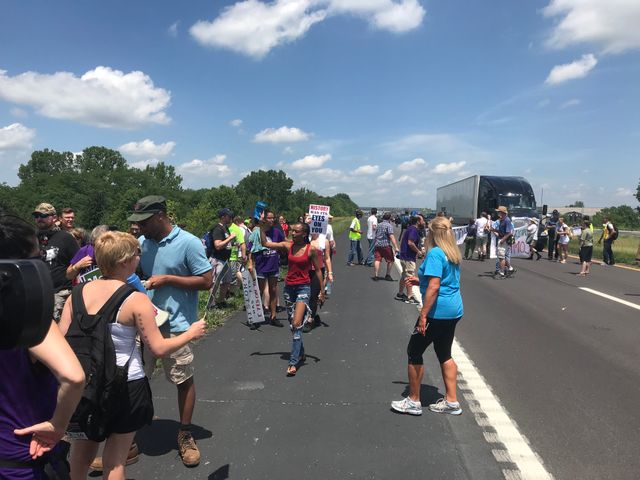 Protesters gathered outside the Lincoln County Sheriff's Office, joining in on the many rallies against the Trump administration across the country.

Protesters chose to rally outside of the sheriff's office because the facility holds seven Immigration and Customs Enforcement (ICE) detainees.

Redditt Hudson, an activist from St. Louis, said he feels everyone should be concerned about the human rights violations happening across the U.S.

"These are crimes against humanity being committed on our watch. You are involved as a citizen whether you like it or not. You stand by and do nothing, or you engage and try to out things back in the right track. You have to fight this egregious policy," said Hudson.

The protest began with community leaders speaking, then they headed to Highway 61. Demonstrators barricaded the roads, blocking drivers going southbound. Drivers were able to continue their routes by driving onto the median to pass protesters. State troopers later came to the scene to clear the roads.

Richard Buthod, a protester, carried a sign reading, "Just stop following orders." Buthod said he held the sign towards the windows of the sheriff's office because he wanted detainees and officers to read his message.

Lincoln County Sheriff John Cottle declined to do an interview but said as of last Thursday, his facility had seven adult ICE detainees. He said they were brought to the sheriff's office after authorities caught them committing other crimes, then they discovered those arrested were illegal immigrants.