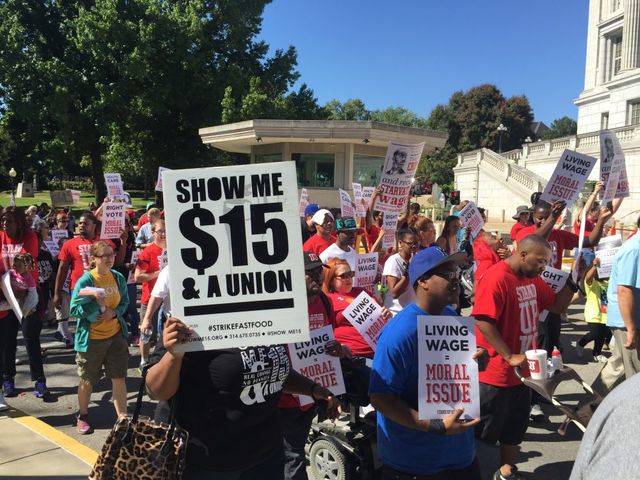 JEFFERSON CITY - "Fighting for Fifteen!" and "Stand up, fight back!" were just two of the many chants ringing through downtown Jefferson City Monday as protesters marched towards to the Capitol.

Stand Up KC is a group from Kansas City that is urging legislators to raise the minimum wage to $15 per hour. The group rallied along with low-wage workers, and faith and community leaders.

Monday's demonstration is part of The Fight for $15 and Higher Ground Moral Day of Action movements. There were 24 similar rallies taking place in other capitals around the nation, including Washington D.C.

Marchers of all ages came from all over Missouri to participate.

Latoya Caldwell, from Kansas City, said she just got out of homelessness about a month ago.

"It was hard for five months trying to raise my children, being homeless, working every day and not being able to make it," Caldwell said. "It was hard to tell my 3-year-old that I didn't have food for her to eat."

Caldwell is passionate about voter rights and the minimum wage being raised.

"We need a voice," Caldwell said. "Our rights and our voice counts. We're making a stand today."

In 2015, Gov. Jay Nixon vetoed a bill to prohibit local governments in Missouri from requiring a minimum wage rate above federal or state requirements. The governor's veto was later overridden by the General Assembly.

Marchers chanted in to the rotunda of the Capitol where several faith and movement leaders spoke.

Rabbi Susan Talvi said, "I am proud to be apart of a moment that is now a movement. This is a revolution that will leave no one, not anyone, behind."

The protesters were not just marching for minimum wage. They were also advocating for voter rights and Medicaid expansion.

The rally held special meaning for Stand Up KC members on the issue of Medicaid. One of their leaders, Myrna Delos Santos, passed away last month at 49, after her lack of medical insurance wouldn't allow her to see a doctor.

Patricia Jones traveled from Kansas City to march with the group because of her passion about voters' rights and opposing a voter ID amendment. She chanted along with many of the marchers, "Vote no on Amendment 6!"

She referred to herself as "an elder" and said she believes her role is important for helping the younger generation understand the importance of what they are trying to accomplish. She said she encourages younger people to go out and vote.

Right now, a Amendment 6 is on the ballot for Nov. 8. If passed, it would establish a provision for a Voter ID requirement in the state constitution. Voters would need to show identification for proof of citizenship before being able to vote in the general election.

Earlier this year, Nixon vetoed a bill that would have established the framework for the Voter ID law. Lawmakers may seek to override his decision at the veto session that begins Sept. 14.