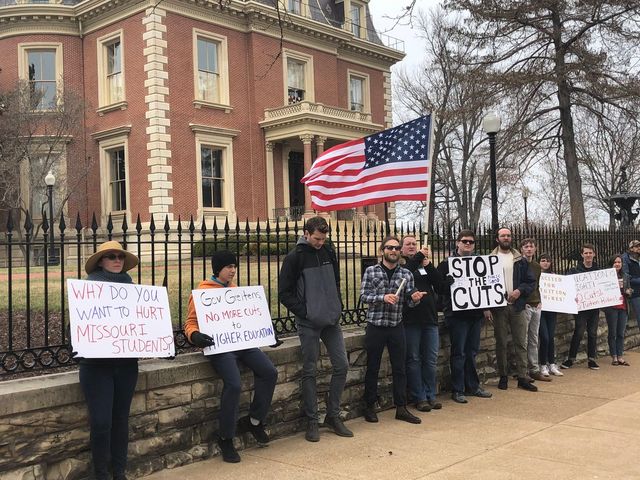 The Stop the Cuts Coalition (SCC) organized the march. SCC is a coalition of Missouri campus groups that oppose Greitens' proposed almost $98 million cut to public higher education in Missouri for fiscal 2019.

"I think it was time for students, faculty and staff in Missouri's public colleges and universities to send a clear messages to Greitens that we don't want these cuts," Joseph Moore, organizer for the SCC, said. "They're unnecessary, they're hurting the [UM System], and they're hurting Missouri students."

These proposed cuts would add to last year's $159 million cuts to higher education, which led to the elimination of 475 jobs across the UM System.

"People in this state care about higher education," Moore said. "Greitens cannot continue to de-fund and disrespect higher education without a very vocal response from Missouri residents and students."

The SCC is built around four main principles: education is a right, no cuts, no tuition hikes and no layoffs.

Dr. Maren Bell Jones, a veterinarian who graduated from University of Missouri, said she went to MU for 11 years before graduating from veterinary school. She said her student loan bill per month was almost double than her mortgage payment.

"We're asking [students] to take the cuts instead of looking at some of the other spending and budgeting issues," Jones said.

KOMU 8 News reached out to Greitens' office but got no response.