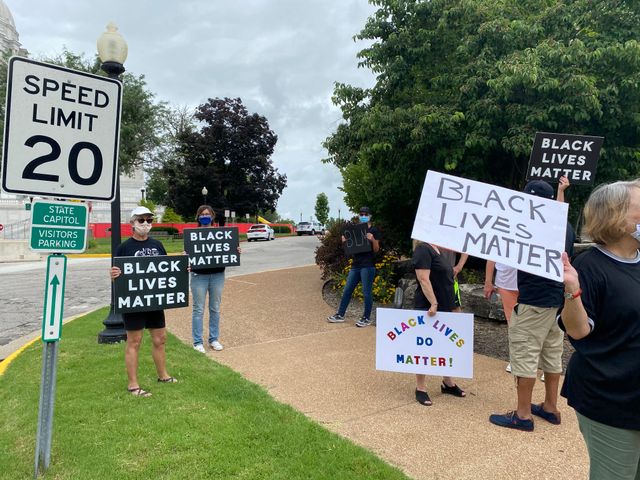 JEFFERSON CITY — On Monday, members of the Jefferson City Racial Equity Group (JCREG) gathered in front of the State Capitol to protest against Gov. Parson’s special session on violent crime.

Due to recent increased rates of crime in the state, Gov. Parson called for the special session to discuss violent crime with lawmakers.

The organization said in a press release that the Governor’s agenda affects black and brown communities disproportionately.

“We need to have legislation to ban choke holds, that looks at the militarization of police," she said. "We need to step back and take a big picture look at all these things. How’s is the training? What do you do with bad actors? A database or mechanism for them to be removed when actions that are inappropriate were taken? This all needs to be address and need to be held accountable.”

Schumacher said that the legislation needs to put more effort into measures for effectiveness, rather than the easier options.

“Our concern is more about incarceration rather than looking at the causes.  We want to be sure that that’s considered and that it’s not just an apparent quick and easy fix. The details of how it would affect people is thought out, and is fair to everyone and effective. I mean we have the highest gun ownerships in the country, in Missouri, and that’s not being addressed.”

Schumacher made a point to say that JCREG is not against police, but fairness for everyone needs to be considered.

“We are not anti police in anyway," she said. "We need police, we support the police. We just need reform so that it’s fair and equitable for everyone.”