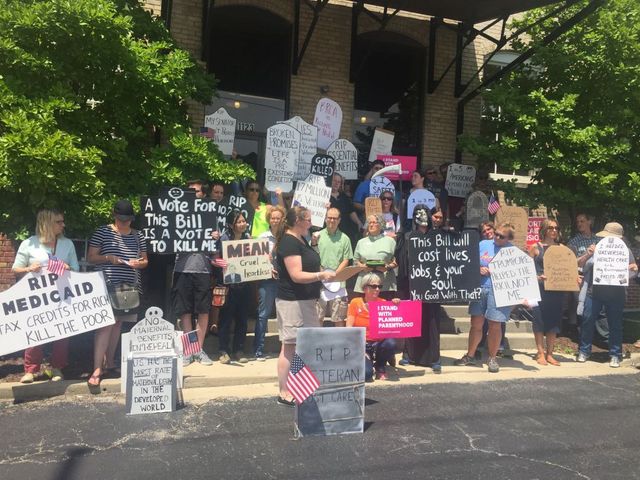 CoMo for Progress, a liberal group, held a "die in" vigil on Wednesday to protest the passage of the Republican health care plan. Protesters say the protest represents the deaths that will occur if people no longer have access to affordable health care.

On Tuesday, Senate Majority Leader Mitch McConnell delayed the decision until after the July 4th recess.

A recent Congressional Budget Office report says the proposed Republican health care plan would result in 22 million fewer people with health insurance. The CBO had a similar report for the House version, which passed in May. The GOP is hoping this plan will replace the Affordable Care Act, also known as Obamacare.

"The Affordable Care Act gave me the right and the opportunity to provide health insurance for myself and my daughter," Activist Pam Pearn said. "This bill would take that away."

Protesters decorated cardboard tombstones with statements such as, "Lifetime cap killed me" or "Died for millionaire tax cut."

Pearn said she came to the protest for her family members.

"My voice in this situation speaks for my family members who have brain diseases and are dying and cannot be here," she said.

Austin Stukins with the Missouri Republican Party said Republicans are trying to get the bill right for Americans.

"The GOP is determined to fix the disaster known as Obamacare and it's going to take time to get it right," Stukins said.

He called the protest inaccurate and misguided.

"There's an overarching notion that Americans are being thrown off the cliff and being treated as everyone is going to die," Stukins said. "It's just a scare tactic brought on by the liberals."

KOMU 8 News reached out to Sen. Blunt about the protest.

"The Senate draft health care legislation is not perfect, but it takes some important steps to help families and small businesses that are struggling under Obamacare," Blunt said in a written statement. "In the days ahead, we will continue looking at ways we can improve the bill and get it to the president’s desk."