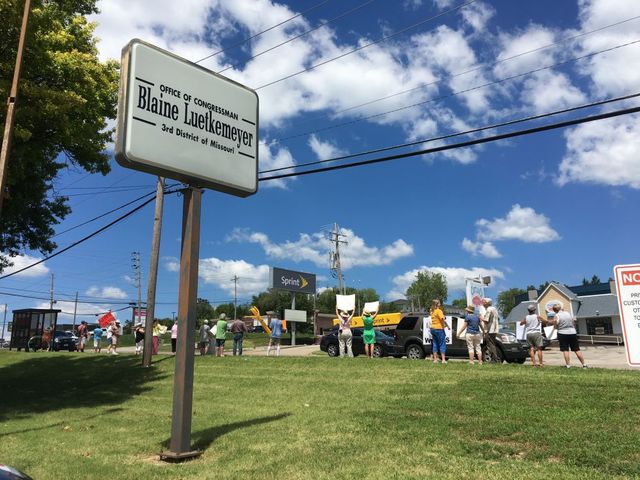 Protesters stood outside of U.S Rep. Blaine Luetkemeyer’s office to advocate for better healthcare. “This is part of a national organization that wanted to get everyone out to show our support for healthcare that supports every American who isn’t concluded in political opportunism,"said Sara Mangan, who is a member of the Jefferson City Area Indivisible. "So we are looking for a transparent process that benefits every American."

Jefferson City Area Indivisible supports a healthcare reform that is thoughtful, bipartisan and achieved through consensus.

Janet Wright, one of the several protesters present said, “what I’d like to see happen with healthcare is to take the Affordable HealthCare Act, to work with it, and to fine tune it. It's got good points and it's got some things that need to be worked on, but you don’t just scrap things and start all over just to pass a bill for no reason. And we’ve got to work together. We’re in this together.”

Early Friday morning another bill to repeal the Affordable Care Act failed to pass in the Senate in a 49-51 vote. The vote leads to three Republican senators going against party lines to vote down the bill.

“I was proud. I was really proud of the three people that stood up and went against their party. I think they put the people before their party, and that makes me proud,” Wright said.

In a statement released Friday, U.S. Rep. Blaine Luetkemeyer said, “ The House of Representatives took the first critical step in saving our country’s health-care system by passing a repeal months ago, but unfortunately the Senate has not been able to follow our lead. The Senate, including the Democrats who forced this horrible law on the American people, must come together to find a path forward.”

Many at the rally believe the next step is more bipartisan and transparent. “Everyone should be part the process. Everyone should have the opportunity to understand the bill, to question it, and to debate it. We’re not looking to necessarily transform healthcare over night into a better system, which Medicare for all would be, but the next step is definitely to stabilize the healthcare system, and to have input from both sides of the isle,” said Mangan.

Luetkemeyer said, “The House stands ready to work with the Senate on a solution that will put families and their doctors back in charge of their health-care.”

The Affordable Care Act will stay in place for now.