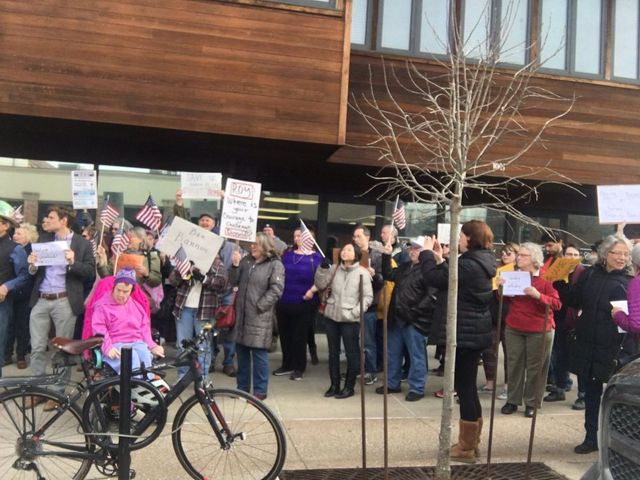 Local organization CoMo for Progress hosted the event named "Stop Trump's #SwampCabinet" to call on Blunt to vote no on these "unqualified and unworthy candidates."

"We've had a hard time reaching him at his D.C. office, CoMo for Progress member Kate Canterbury said. "In his office here, we're experiencing full voice mails, not getting responses."

Canterbury said a lot of people she met from the organization have never been political active before.

"They just feel compelled that people that work for agencies that or for the government that are seeing changes happened so fast that are not able to keep up with them," Centerbury said. "We concerned about unqualified people been appointed."

She said her biggest concern is Trump's decision to put White House Advisor Steve Bannon on the National Security Council.

Canterbury said she hopes the city will host a town hall meeting to talk with Blunt very soon.

"The senator serves all of us, he doesn't just serve the 49 percent that elected president," she said.

There were a few people in favor of Trump at the rally, including two people with signs reading "The Silent Majority Stands With Trump" who stood in the back of the larger protests. One of those demonstrators declined to speak with KOMU 8 News.

He compared the current situation to 2009, when the Senate had confirmed the majority of President Obama’s cabinet-level nominees by this point in the administration. Blunt noted that Senate Democrats have only allowed votes on five of Trump’s nominees so far.

Editor's note: This story has been updated to reflect Blunt's comments in Washington as well as information regarding Trump supporters present at the rally.